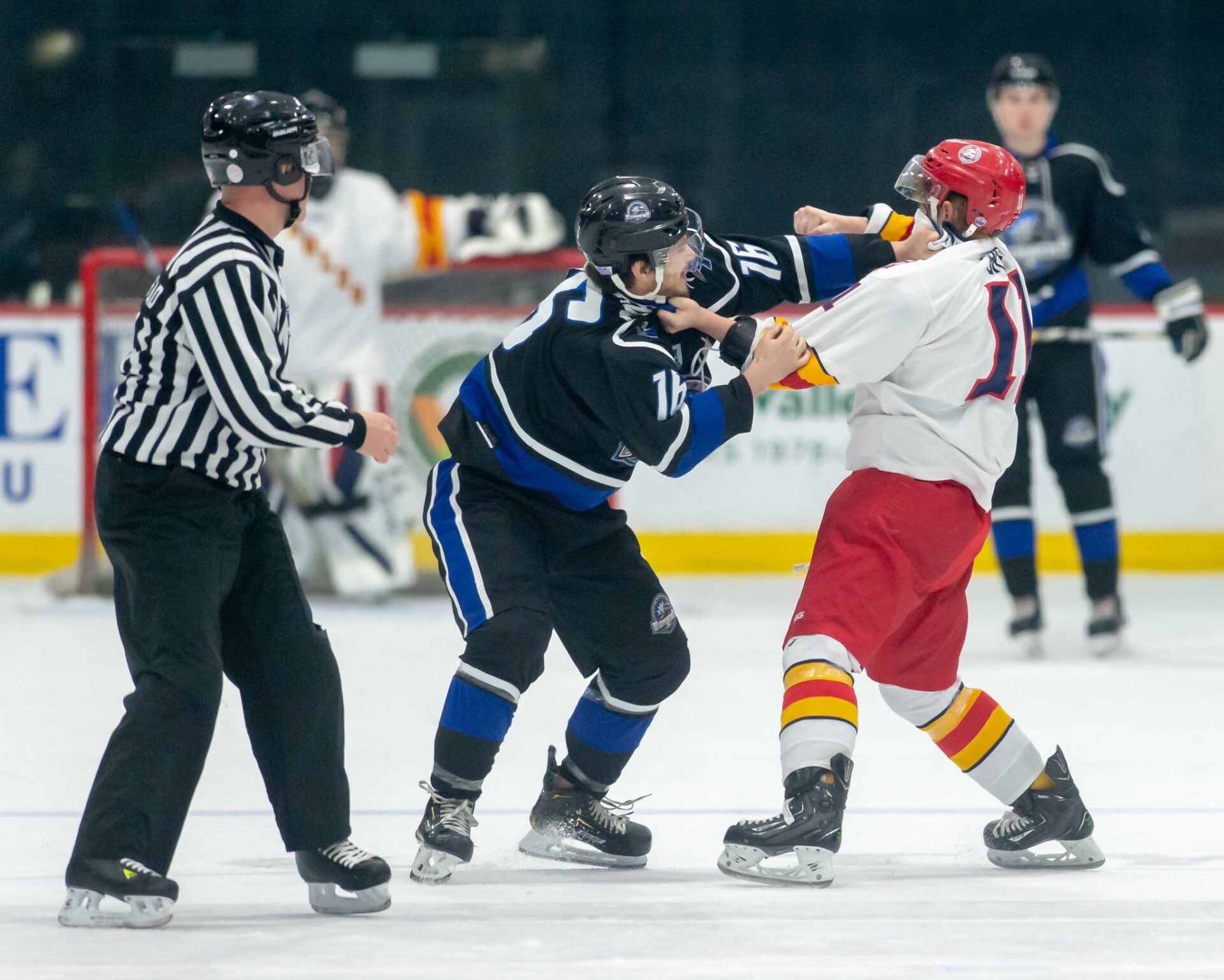 So you’re watching a hockey game and a fight breaks out. Are you wondering if the combatants are truly trying to injure each other? Why do these hockey fights occur? And what are the rules and penalties for fighting? What does it mean when people say that fights are “staged?” This article investigates the world of hockey fights.

Hockey fights are real. Combatants in a fight truly punch each other, often resulting in cuts, bruises, and concussions. Even “staged” fights involve real fisticuffs. But you should keep in mind that there are codes involved in fighting. Players don’t intend to gravely injure one another, especially during fights between unequal combatants. Referees will also intervene if a fight gets out of hand or especially dangerous.

Why Do Hockey Players Fight?

Hockey is a contact sport that occurs at high speeds. As a result, body checks and collisions occur that players do not always agree with.

If players deem a hit to be “dirty” or overly aggressive, they may respond by challenging the opponent to a fight. A hit delivered to a star player can also motivate a player to challenge another to a fight.

Physical battles around the net can also escalate into fisticuffs. In these instances, aggression and frustration boil over until the point that players toss their gloves aside and fight.

It is believed by some that a fight can shift momentum in a game. In this case, a player may initiate a fight when losing by one or two goals to motivate their team.

Put differently, the idea here is that a team becomes energized when one of their teammates engages in a fight. There is debate over the legitimacy of this claim.

When two players fight in most professional leagues like the NHL, they both receive a five-minute major penalty for fighting.

If one of the fighters clearly instigates the fight against an unwilling opponent, they get an additional two-minute instigator penalty and a ten-minute misconduct penalty – the same applies to goalies but typically a player will serve the time in the penalty box.

Most recreational and beer leagues outlaw fighting. If you fight in these leagues, you will usually be banned for life or suspended for a lengthy period of time – depending on the severity and the decisions of the referee and league officials.

What Is A Staged Fight?

Part of the confusion about the legitimacy of hockey fighting is the history of “staged” fights. Staged fights have little to do with any in-game reasons for fighting.

Staged fights usually occur off the opening faceoff in a game. At that time, no hockey has been played to develop any background for the fight.

In other words, the fight is occurring for the sake of the fight, rather than as part of the hockey game.

In the last decade, the NHL has made efforts to eliminate staged fights from the game. They promoted an atmosphere of violence separate from the game of hockey itself.

Staged fights are virtually nonexistent in NHL hockey today. Typically, they would have involved “enforcers.”

An enforcer’s skill set consists of toughness and fighting ability, not skating or puck-related skills. Enforcers were primarily in the lineup for the sake of fighting enforcers on the other team and protecting star players.

See also  Why Does Ice Hockey Have Three Periods? (Not Two)

Because enforcers were not skilled hockey players, they viewed fighting as their role on the ice. Sometimes these fights would develop before the game even began, resulting in the rise of “staged” fighting.

Enforcers are largely a thing of the past as the sport now evolves toward speed and skill over toughness at the professional level. In fact, fights are occurring less than ever in today’s NHL.

Whether a fight has developed naturally, between enforcers, or in a staged form, the blows being dealt are always real.

But, in most cases, there is an underlying respect between the players. This is often described as the hockey fighting “code.”

Players will usually only fight other players who are in their weight-class.

A fair fight should also see both players willingly oblige to the fight. Players should not attack others from behind or sucker-punch them.

If one player gains a significant advantage over the course of a fight, they may let up on their opponent and allow the referees to intervene.

It is also not unheard of to see players tap or acknowledge each other in some way after a fight. This is a show of respect for a good fight.

The punches being thrown in hockey fights are always real. But it’s worth noting that players fight for different reasons. Angry rivalries can escalate into violent fights, but at other times fights occur for the sake of motivating the team. Regardless, a level of respect is typically present during hockey fights. Staged fights are also nearing extinction in the NHL.

Here are some of the main reasons hockey players fight

In my other article, I go into more depth about the reason there is more fighting in hockey than other sports and why players in the top divisions are mandated to wear a fight strap.