Body Checking in Hockey – How, Why & When? 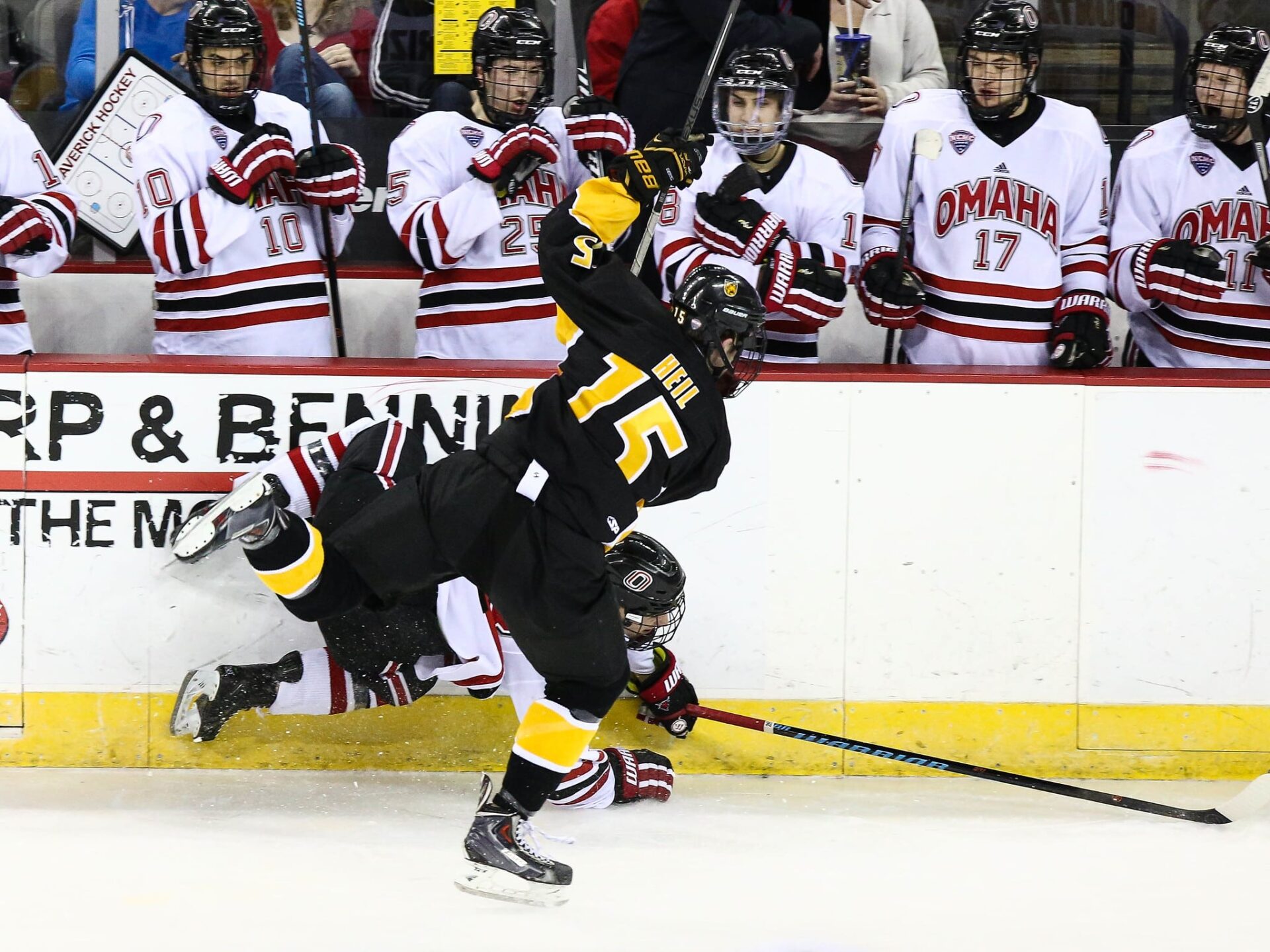 There are few things in sport that can get so many fans out of their seats all at once then a perfectly executed open ice body check. The physicality and speed of ice hockey is what attracts so many fans to this great sport. Hockey is the fastest sport on Earth and every play must be made in a split second due to this.

Body checking in hockey is a where a player deliberately makes physical contact with an apposing player in possession of the puck – to stop or slow their movement across the ice and seperate them from the puck and advancing on goal. Body checking is a legal (in mens adult leagues that permit it, i.e NHL) physical hit that takes skill, timing and real precision.

What many people do not realize though is to properly connect on a body check is a skill in itself, some players such as Niklas Kronwall and Scott Stevens, have become even more known for their hits as their on ice ability. It’s an art form in its own way.

Here’s everything you need to know about checking in hockey.

What is a Body Check?

USA Hockey has defined a body check as body contact with the purpose of separating an opponent with possession of the puck.¹

While many checks appear different to the eye, all legal checks must follow the guidelines established by the governing body that the game is being played under.

The trunk of the body is defined as the area between the hips to the shoulders.

Any contact made from or to a part of the body outside of this area including the head, back, or knees among others can result in a multitude of penalties.

Another important aspect of delivering a body check is that the player being checked must have possession of the puck when contact is being made, hitting a defenseless player is not an acceptable hit under the rules of the game.

It is important to learn how to properly throw and receive a check not just to improve as a player but also to make the game safer for all involved.

How to throw a proper Body Check

There are many keys in delivering an effective hockey check, many of which begin well before any contact is being made. Anticipation, timing, and technique are all important in delivering a good check.

With a sport as fast as ice hockey, a player can not simply react to the play in front of them, “reading the game” or anticipating the play, is what allows a player to be in the right place at the right time.

Getting into the right position also has a lot to do with proper angling. Angles may not always seem like they have a place in sport but they are very important.

An NHL ice surface is 200 feet long by 85 feet wide. What this means is that if you can not properly angle an opposing player, they have plenty of space to avoid the check and continue to attack your goal.

Taking a proper angle to an opposing player forces them into a path that can only lead to body contact, the player can choose to make contact or get rid of the puck in time to avoid the check.

Breaking down the technique of a proper body check can be complicated² and takes many repetitions to perfect as body position is constantly changing and with the speed of the game means to perform a check in a game, this technique must come as second nature.

To deliver a check, a player must be in a low, stable body position with their knees bent, and their head and chest must be up.

As contact is about to be made, the player delivering the check will force their momentum up through their body and into the opposing player.

A proper check will see a player go from a low starting position to a higher body position with principal contact being made by the shoulder or hip depending on the opposing players body position.

The player delivering the check must also be sure not to leave their feet as this is also illegal.

When done correctly, this check will force the opposing player to lose control of the puck and in hopes allow the checking players team to recover the puck.

When can you check?

Contrary to what many who may not have played hockey may believe, checking is not apart of the sport for young players.

Starting in 2013, USA Hockey and Hockey Canada³ agreed that age in which checking would start for boy’s hockey is the age of 13. The rule change in North America has led to similar changes in Europe and all over the world.

Prior to 2013, the age where checking became legal in boy’s hockey was age 11.

These changes were caused by studies showing that the developing brains of young children could be negatively impacted by head trauma at a young age.⁴

A statistical trend also showed that a majority of youth players who quit hockey did so when contact hockey begins, by pushing the hitting age back, the governing bodies that run hockey believed that they could get kids playing longer.

Once youth hockey is over at the age of 18, many players will move into non-contact adult hockey leagues.

A select few will move into junior hockey (u20), college hockey, or professional hockey where body contact is legal and very much apart of the game.

An important note is that checking is only legal in boy’s and men’s ice hockey.

Body checking is still illegal in girl’s and women’s hockey for the time being no matter what the age group.

The Art of the Body Check

A well timed, well delivered body check can change the entire momentum of a hockey game.

The excitement of the crowd, the energy caused on the ice for the players involved in the game, and the physical toll on the body that a good body check can cause can flip a game on its head.

Checking is a huge part of hockey and an X factor that draws so many fans to the game. The next time you sit down and watch a game I hope you can truly appreciate the beauty of a well executed body check.