Can You Hockey Stop On Figure Skates? (Not What You Think) 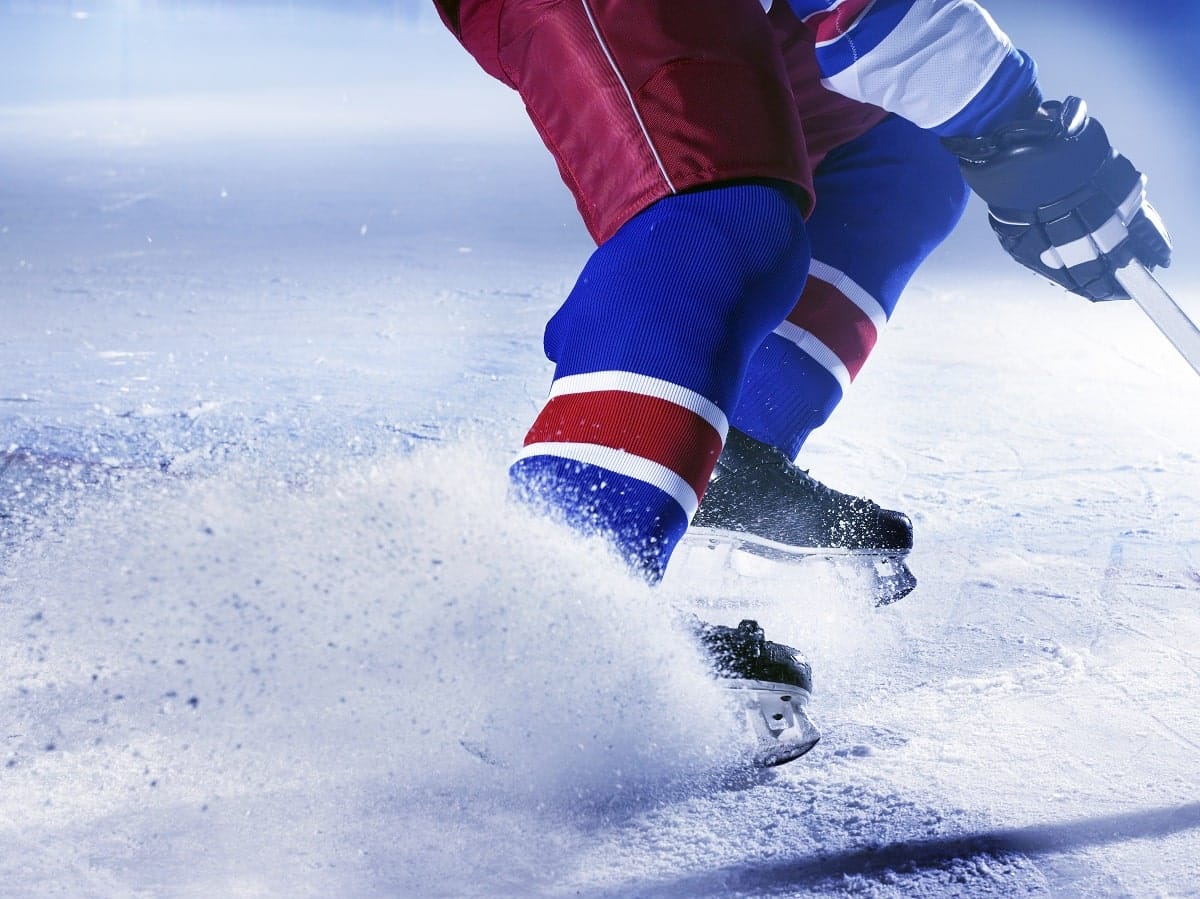 The hockey stop is well known to players and fans alike and is often synonymous with the spray of ice that’s thrown when a player quickly stops and turns direction. The hockey stop is a great method for quickly slowing down and maneuvering the body towards a different direction, often to skate down the ice after a puck.

While figure skates are different from their hockey counterparts, they can still successfully maneuver through a hockey stop. When doing so, figure skaters tend to place more emphasis on balance and control and may use a single skate to stop as opposed to using both. This isn’t the most popular figure skating stopping method, but it’s used throughout the sport on occasion.

There are several key differences when it comes to hockey skates vs figure skates. The two designs serve different functions and need to be specially built according to their end purpose.

When it comes to the material of figure skates, they’re much lighter and more pliable than hockey skates. Due to the nature of hockey, the skates must be firmer and offer enhanced ankle support as well as a protective barrier against a puck.

Figure skates often have a longer blade, which makes it easier for skaters to find a sense of balance on the ice. The front portion of the blade curves a slight bit, allowing the skater can go through their motions smoothly.

The addition of a toe pick allows figure skaters to jump and keep their spins tight. The teeth on the toe pick are ridged which allows the skater to dig the blade into the ice and offers them an increased level of balance and the ability to push off of the ice.

The toe pick is the most significant difference between the two skates, as it allows figure skaters the ability to push forward by digging it into the ice and also helps in other stopping and turning maneuvers.

The addition of a pick to the end of hockey skate blades would likely increase the danger on the ice and it wouldn’t suit the fast-paced nature of the sport.

All in all, figure skates tend to be the choice for people who just want to learn how to skate. The wearer has a greater range of motion while wearing the skates and the extra bit of blade length makes the learning experience easier to pick up for those new to skating.

What is a Hockey Stop?

Hockey players have a very specific and almost flashy way of stopping dead in their tracks, which allows them to turn quicker and chase the puck in a different direction. Often, you’ll see a sheet of ice spray when the player stops quickly — this is a telltale feature of the hockey stop.

The hockey stop, when properly executed, allows the player to stop and turn efficiently and quickly, which is integral to the game of ice hockey and its fast-paced movements. It’s an abrupt stop, even when a skater is moving at top speed.

In a hockey stop, both skates are turned in the same direction in a parallel fashion and are used to skid against the ice. The body weight distribution of the skater is usually slightly more on the front skate as the skate begins to apply pressure to stop the skater’s forward momentum.

Figure skaters often learn a variety of stopping methods, including the snowplow and t-stop maneuvers. However, a hockey stop can be performed on figure skates but is often done with more attention to the details such as posture and arm positioning.

Figure skating is all about smooth and graceful movement, whereas this is less of a concern in ice hockey where the game is all about speed and physicality. Instead of using both skates, figure skaters may “hockey stop” using just one skate, which leads to greater control but may result in a slower stop.

When the tables are reversed, you should not attempt figure skating maneuvers on hockey skates. You’re likely to fall on the ice due to the fact that hockey skates aren’t built for spins and jumps.

Can You Transition From Figure Skates to Hockey Skates?

If you’ve learned how to skate on figure skates, but now want to attempt at learning how to play hockey — you may find the transition between the two skates a bit difficult at first. Don’t worry, however, as it has been done by many people and often ends up strengthening the resulting hockey player.

Due to the fact that hockey skates don’t have the toe pick, you may end up realizing how much you relied on the pick for stopping and accelerating. However, with a bit of practice and ice time, you’ll be able to make the move to hockey skates.

Getting used to a new pair of skates before they’ve been broken in can take some time and learning hockey maneuvers can be very different than figure skating drills but it’s likely that you’ll end up being a more flexible and diverse skater after having learned both.

You’re more likely to have developed a greater sense of balance and a better skating posture once you’ve learned the basics of figure skating. These are transitional skills to hockey and you’ll notice the benefits almost immediately.

Adding the Hockey Stop to Your Arsenal

As you’re learning to skate, whether it’s for hockey, figure skating, or just a casual hobby — the hockey stop can be a great maneuver to add to your skillset. It allows you to come to a complete stop quickly and efficiently and allows you to flip directions on a dime.

Though figure skates feature a different design and material than hockey skates, they can still be used to hockey stop and it’s something that most figure skaters use at some point or another. Figure skates are a great first pair to learn on and they can offer additional balance and support to newcomers.

P.S Ever wondered if you can hockey stop on Synthetic ice?