Do Hockey Goalies Get Concussions? (The Risks) 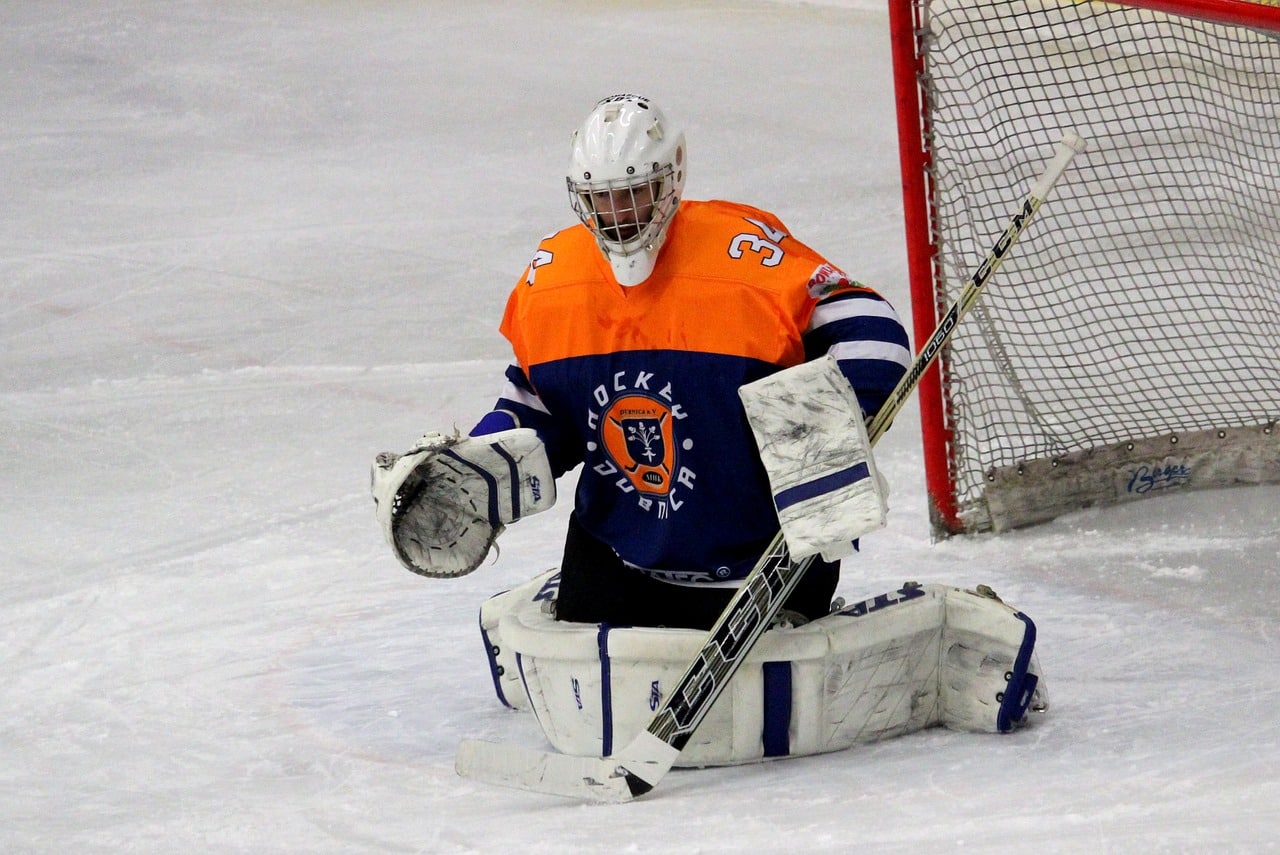 It’s hard to play goal in ice hockey without enduring some kind of physical contact which makes goalies just as prone to injury as any other player. In fact, they may even be more at risk since they’re playing right in front of hard metal goal posts and are facing 100 mile-per-hour shots on a regular basis.

Hockey goalies definitely do get concussions as bodies, sticks and pucks are flying forcefully around the ice surface at an incredible speed. They’re often physically run into by their own teammates as well as opposing players and this can lead to head injuries. According to statistics, a total of 14 NHL netminders missed a combined 276 games due to concussion over the 2017/18 and 2018/19 seasons.

In general, goaltenders playing in recreational leagues don’t suffer as many injuries since the games aren’t as competitive or as physical. However, there’s always a chance they can be struck in the head by a player, stick or puck and suffer a concussion – as with any high speed contact sport.

What is a Concussion?

A concussion is a mild brain injury caused by a blow, jolt or hit to the head which causes the head and brain to move back and forth. This sudden movement can damage brain cells and while the effects can be serious, most concussions recover in 7-10 days.

Goalies sometimes suffer concussion due to being struck in the head with a stick or puck even though they’re protected by their helmet/face mask Another reason they’re being injured is because more and more players are driving hard to the net with the puck and colliding into them. In many instances, a goalie’s teammate may be the cause of a concussion by pushing or body checking an opponent into their own goaltender.

See also  Where Was Ice Hockey Invented? (Canada vs Europe)

In addition, goalies are sometimes injured during warm ups prior to games after being struck in the head with shots from teammates. Goalies safely deflect most shots with their pads and body armour but powerful shots can sometimes hurt or cause more serious injuries.

Most hockey leagues have rules in place to protect goaltenders such as a goalie interference penalty. But while these result in a two-minute minor penalty for colliding with a goaltender they can’t stop the collision from happening in the first place.

In theory, NHL goalies are protected by Rule 78.

The rule states that an attacker who initiates contact with a goalie in or out of the crease area shall receive a two-minute or five-minute penalty depending on the severity of the collision. However if the attacker is pushed into the goalie by a defender he won’t be penalized.

If a goaltender plays the puck with his stick outside of the goal crease he can’t be prevented from returning to the crease area by an attacker. But if a goalie initiates contact when out of the crease he will be assessed a minor penalty.

But while there are rules in place to punish players from colliding with goalies they come into effect after the fact and goaltenders can still suffer injuries resulting from the play.

In addition, the NHL has rules in effect which limit the size of a goaltender’s equipment and this could also be a reason for increased goalie concussions.

Goaltending equipment has been recently been regulated, as the league believes it will result in higher-scoring game – which prove more popular with hockey fans attending games.

See also  How to Impress at a Hockey Tryout? (& Get Noticed)

The allowed size of a goalie’s pants, leg, arm, and chest pads have been reduced in recent years and netminders aren’t as well protected as they once were (although it wasn’t till 1959 that masks were introduced – unbelievably before that goalies didn’t wear any face protection)

The newer rules haven’t affected a goalie’s mask and helmet but goaltenders are now more vulnerable because of their smaller equipment and don’t have as much resistance to on-ice collisions. This in turn can result in head injuries if they collide with the ice or goal post.

There’s no doubt today’s hockey players are generally bigger and faster and can shoot the puck much harder than those of past eras. The style of game now being played has resulted in numerous goaltender concussions over the past few years.

In years gone by, goaltenders who were injured during games usually just carried on. Part of this was due to the fact that NHL teams weren’t required to dress two goaltenders for each game until 1965/66.

In March, 2011 the league introduced its concussion protocol which stated that a physician must evaluate any player who shows symptoms of a concussion. The policy was then updated in 2016 when the league started using concussion spotters to help identify players who show signs of head injuries during games.

Also, if a goalie loses his helmet during a game these days the play is whistled dead by the referee.

These concussion spotters have the power to remove players from a game and have them immediately evaluated. It’s a step in the right direction but often times players don’t begin to show symptoms until several days after being concussed.

It’s hard to believe that many NHL goalies didn’t wear helmets and/or face masks until the mid 1970’s and there’s still no NHL rule which makes them mandatory. However, most other hockey organizations around the world such as USA Hockey have mandated the use of facemasks.

Former NHL goalie Tim Thomas has suffered brain damage from hockey concussions but with the new protocol in place it’s hoped that players will now be properly diagnosed and kept from playing if they suffer a head injury.

But even so, goalie concussions appear to be a part of the game that won’t disappear overnight.

Do Hockey Players Get Concussions?

For children, hockey has the highest concussion rate in team sports, even more than football. Estimates show that concussions account for 15% of injuries in hockey players ages 9-16.

Hockey does have a high concussion rate compared with other sports – which is why wearing a protective well fitting hockey helmet is critical.

A primary cause of concussion in contact hockey is body checking and fighting – which most recreational players do not participate in.

Surprisingly though women’s college hockey which does not allow checking has a higher concussion rate than mens college hockey. (according to a study in the Journal of Athletic Training) – which may be as a result of a women’s biological differences or increased rates of self-reporting.

The best way to avoid concussions as a hockey players is to look up, stay alert and always be ready to stop on a dime to avoid contact with other players.

If you want to know more about the risks of playing hockey – read our article – is hockey safe?