Do Hockey Players Get Fined for Fighting? (NHL Rules) 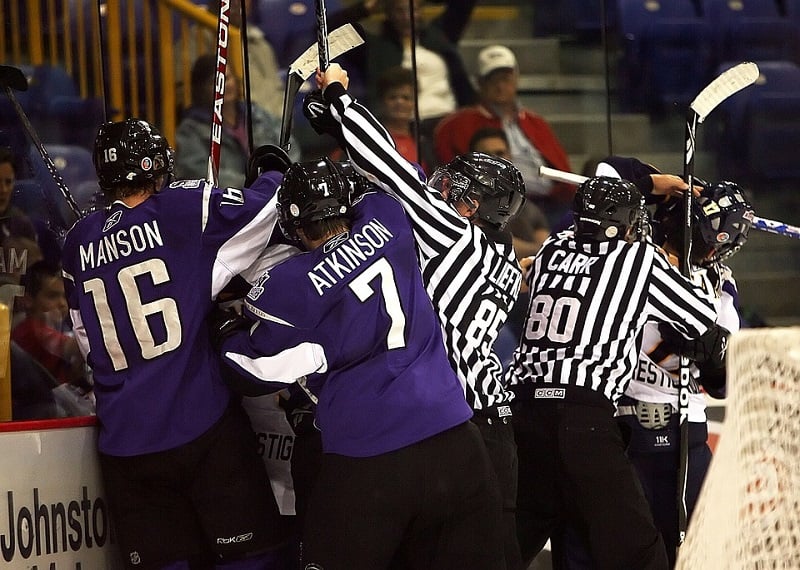 Hockey is the only major professional sport where players are not only allowed but sometimes encouraged to fight during a game. But have you ever wondered what type of disciplinary action players face when they fight during a hockey game?

Generally speaking, hockey players do not get fined for fighting during a game. While the players don’t typically get fined, in the NHL if a player is assessed an instigator penalty in the last five minutes of regulation, or during overtime, the player’s Coach is fined $10,000. That fine is doubled for each subsequent incident.

Is Fighting Allowed in Hockey?

Technically speaking, fighting is a violation of the rules in hockey, similar to other penalties such as hooking, slashing, high-sticking, etc. However, players are not automatically ejected from the game for engaging in fisticuffs.

Typically, players involved in a fight are assessed a five-minute penalty, known as a Fighting Major, and spend that time in the penalty box, unable to participate in the play. Once the players serve their respective penalties they are allowed to return to the bench and participate in the remainder of the game.

See also  When To Sharpen Your Ice Hockey Skates? Every 15 hours

The third-man-in rule also prevents another person from jumping in on a fight in progress, any player who jumps in on an existing fight is given an automatic game misconduct. The same applies to any player who leaves their bench to fight.

While players are penalized and coaches are sometimes fined for their players fighting, it is and has always been an accepted and sometimes encouraged part of the game.

What is a Fight Strap?

Many years ago a fighting strategy was for players engaged in a fight to pull their opponent’s jerseys over the head to restrict their eyesight and movability. In more recent years, an attachment to hockey jerseys called a fight strap was introduced to prevent that from happening.

Any players found to not have the fight strap attached automatically receive a game misconduct, whether that player was engaged in a fight or not.

While there are no set “rules” during a hockey fight, hockey has a set of unwritten rules, also known as “The Code”. The Code is understood and followed by *most* players who fight and is essentially a sign of respect among players.

How Do You Win a Hockey Fight?

Winning a hockey fight is extremely subjective and not always clear. Generally, a player wins a hockey fight with a takedown of an opponent, aka the player who comes out on top at the conclusion of the fight.

However, it’s not always so clear-cut. Often times a player can land several more punches and still end up on the bottom of the pile.

History of Fighting in Hockey

While the exact origins of fighting in hockey are unknown, hockey fights have been around just about as long as the game overall and have always been naturally accepted.

According to Sports Illustrated, “the first indoor hockey game ever played – March 13, 1875, in Montreal – was followed by fisticuffs between players and spectators and others who wanted to use the arena for skating.” While more recent years have seen an extreme decline in the fighting due to the increased awareness of the lasting impact of head injuries, from the 1970s through the 1990s there was an average of over one fight per NHL game.

During this era of hockey, it was not uncommon to see bench-clearing brawls and players violently swinging their sticks at their opponents’ heads.

Should Fighting Be Allowed in Hockey?

If you asked this question to 100 people you will undoubtedly get differing answers. However, for most players, specifically in the NHL, fighting plays an integral part in the game. In a poll conducted with the National Hockey League Players Association (NHLPA), 98% of players voted to keep fighting in hockey.

While on the surface fighting, on ice, with shards of steel attached to your feet seems like a high-risk, low-reward situation, fighting allows players to police themselves. It keeps players in check from taking cheap shots. While a player may (or may not) receive a penalty for a cheap shot, a more severe consequence would be a fist to the face.

Additionally, fighting has long been known to change momentum during the course of hockey games. Winning a fight gives energy to the team, much like a well-timed goal or a big check causes a momentum shift.

Eventually, fighting will, unfortunately, likely get banned in hockey. The NHL’s leadership has tried to remove, or at least increase penalties for fighting. It is estimated that fighting accounts for up to 10% of concussions in hockey.

However, while there’s no hard evidence that the game is any more or less safe with fighting, there are more concussions in the NHL despite fighting drastically decreasing.

For the time being, fighting remains an important, nostalgic, and traditional part of the game and while players get penalized, and coaches fined in some instances the resounding feeling of people who have played the game at the highest levels want to fight in hockey.