What Is a Fight Strap on a Hockey Jersey? Tie-Downs 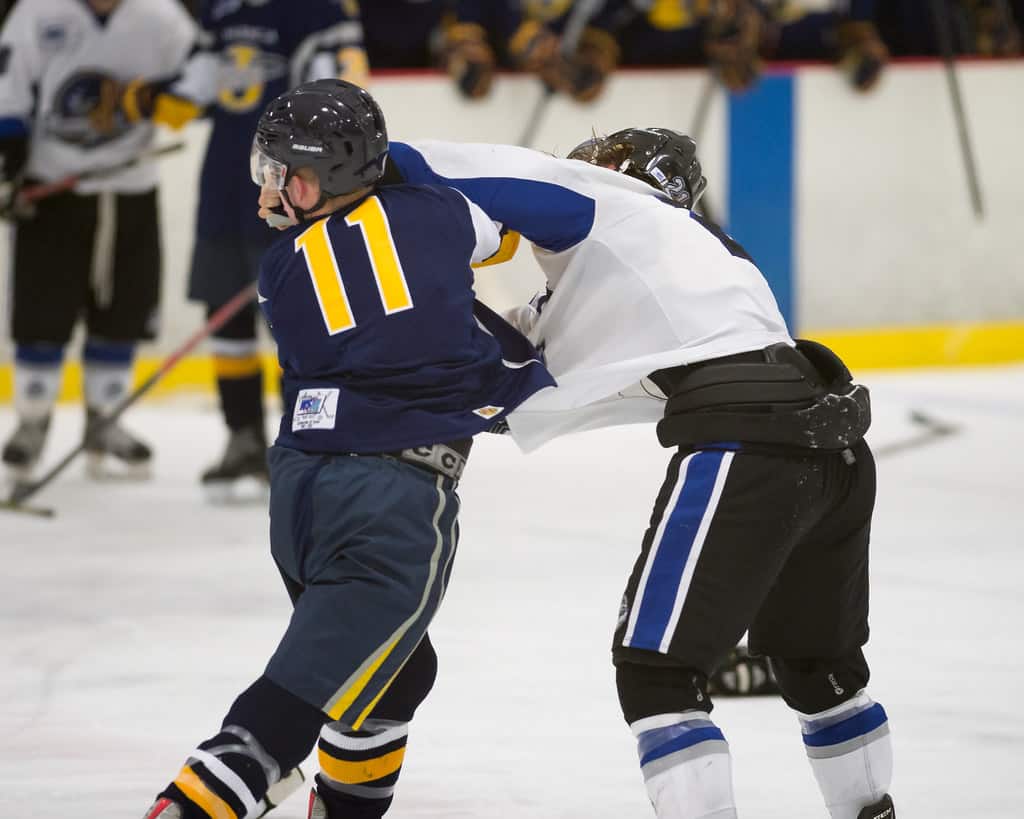 Every heard the word ‘fight strap’ and wondered what it’s for and why most players wear one during a hockey match?

The fight strap is the name given to the attachment on a hockey jersey which keeps it on during fight. It was introduced to prevent players from ending up with jerseys covering their heads – which can be particularly dangerous during a fight.

They’ve been used since the 1990s and most top level players wear them, but they are not obligatory.

Before fight straps were introduced it was common to see hockey fights end with the jerseys wrapped around their heads (fighting blind) or torn off with parts of their elbow pads and chest protector pulled apart.

Fight straps are loops of fabric sewn into the back of a jersey which tie-down to the players pants during a game.

Fight straps can be sewn into the jersey and then use a velcro or metal snap attachment to attach to the pants.

It’s unusual for the fight strap to come off as it pretty securely attaches both the pants and the jersey, but if the struggle or force applied it can snap and come off.

Penalty for not having a fight strap

If you’re involved in a fight and your jersey is pulled off and you’re not wearing a strap, then in the top leagues you’ll also get an automatic game misconduct (in addition to any misconduct from the fight itself.)

“A player who engages in a fight and whose jersey is not properly “tied-down” (jersey properly fastened to pants), and who loses his jersey (completely off his torso) in that altercation, shall receive a game misconduct penalty.”

The jersey, however, must come completely off the player’s torso for this misconduct to come into effect. If it partially comes up over a player or they do have strap no penalty is enforced.

NHL enforcer Rob Ray is renowned for constantly losing his jersey during his infamous fights. He’d purposefully wear a loose fitting jersey so he could slip an arm out and gain an advantage. Triggered by this and other events in the league, the NHL modified the rules to encourage most players to wear fight straps in their jerseys.

Most amateur players do not need to wear a fight strap, but if you’re playing in an official league find out the specific rules that govern your matches.

Even in the top leagues, fight straps are not mandatory, they are just encouraged due to the penalty rule in place. Because of this most players in these top divisions do wear straps to keep their jerseys in place during fights.

“While not a mandatory piece of equipment in the NHL, most players now wear fight straps because of the penalties involved with losing equipment.”

If you’re want to learn more about why some hockey players fight and if all hockey fights are real. Click through to read my articles.