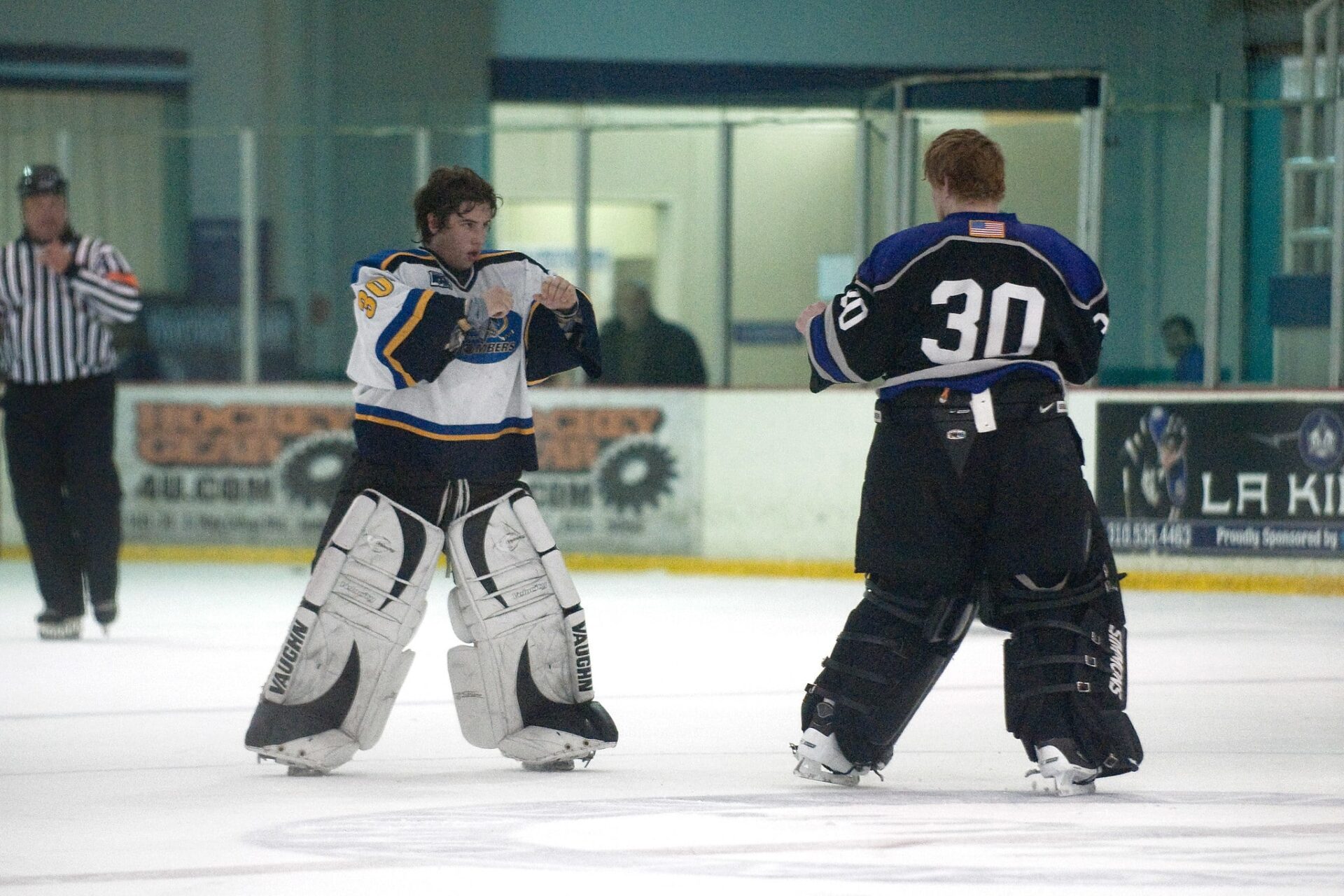 Hockey fights may not be as common as they used to be but they still take place and sometimes include all of the players on the ice. You may be wondering if the goalies get involved too since they are hauling around nearly 50 pounds of equipment on their bodies.

Hockey goalies certainly do fight from time to time since they are treated just like any other player on the ice when it comes to being penalized. Goaltenders don’t fight as often as other position players but many of them have gone toe-to-toe with opposing players over the years.

A hockey goalie is just like any other player on the ice which means they often get frustrated and agitated at their opponents. They are sometimes subject to physical or verbal abuse and will drop their gloves and slug it out as a way of letting off some steam.

Since goalies are well protected with equipment, it usually takes quite a bit of physical harassment to get a netminder angry enough to start a fight.

On some occasions, a goalie will start or enter a fight to protect a teammate who may be losing a fight badly or is outnumbered by the opposition during an altercation.

While netminders will sometimes take their frustrations out on opposing players who have made physical contact with them in and around the goalie crease they usually fight their goaltending counterpart from the other end of the ice.

Most goalie vs goalie fights take place during on-ice fights or brawls in which every other player on the ice has partnered up with an opponent.

In these instances, the two goaltenders will sometimes skate towards center ice and engage in fisticuffs with each other or one goaltender will initiate the action and skate all the way to the other end of the rink to start throwing punches with their fellow goalie.

Seeing a goalie letting their fists fly on the ice is typically a rare occurrence in most leagues, including the NHL, but they do fight each other from time to time. In fact, many fans view it as quite an entertaining spectacle when two goalies square off against each other and there are many popular videos of goalie fights online.

When it comes to fighting, goalies are subject to the same rules and punishments as all other hockey players on the ice. This means they are assessed the same two-minute minor and five-minute major penalties from the officials for infractions.

A goalie who throws a swing at another player may be assessed a minor penalty for roughing but if the incident is ruled to be a fight then a major penalty will be given. However, in most hockey leagues around the world a goaltender doesn’t have to serve their own penalty as a teammate may serve it for them.

The NHL will assess an five-minute penalty for a fight but some leagues may eject players for fighting. In this instance, a goaltender will be thrown out of the game just like any other player. For example, this is the case in NCAA college hockey in America. The goaltender will also be subject to any other punishment such as suspensions and/or fines when warranted.

In the NHL, the rules state that a player, including a goaltender, will be ejected from the game if they are involved in three fights during the same contest. In addition, a goalie will be handed a minor penalty for leaving the crease during a physical alteration which involves other players on the ice.

NHL goalies with the most fights and penalty minutes

The list below shows the NHL goalies with the most fights in their careers.

This list shows the goalies with the most penalty minutes in their NHL careers.

While it’s still a rare occurrence for a hockey goalie to fight it’s a sight which worries most coaches. Since goaltending is considered a key position on a hockey team there’s always a chance a goalie could get injured, ejected or suspended due to a fight.

Losing a goaltender for a portion of a game or longer is usually the last thing a coach and general manager wants to deal with. If a team is without its top goalie for any amount of playing time its chances of winning are greatly reduced.

In general, hockey fights are declining year after year but most leagues still haven’t banned it. Some leagues will eject and/or suspend a player for fighting while other leagues such as the NHL will simply assess a five-minute penalty for the infraction.

As long as fighting is allowed in hockey, fans should expect to see goalies partake in fisticuffs from time to time.