Hockey Cage OR Visors – Which Is Better? (The Honest Truth) 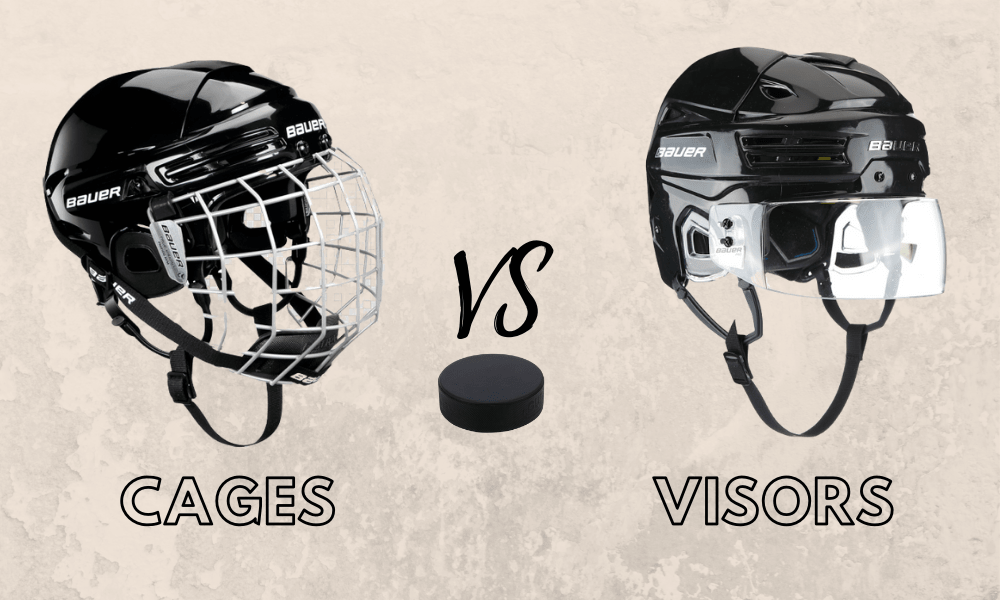 Are you unsure of whether to wear a hockey cage or visor on your helmet? Every hockey player faces this decision, although each option is used more commonly at different levels of the sport. But does a cage or visor provide better vision on the ice? How much does safety differ between a cage and a visor? Which is better? This comprehensive guide will helpfully compare the pros and cons of both cages and visors.

The hockey cage and visor both have their own strengths and weaknesses. Cages offer full protection and won’t allow any injuries to your face. But some players find the cage distracting to look through. Visors are more convenient because they are transparent and allow in-game access to the face. But half-visors leave the face partly unprotected and they can fog up. To choose what’s best for you, decide whether you prefer safety and practicality or convenience and style.

Why Do Hockey Players Wear Cages and Visors?

Hockey players are required to wear either a cage or a visor at nearly every level of the sport.

First and foremost, the cage and visor are worn for safety reasons. Hockey is an unpredictable game with hazards – namely pucks and sticks – that can potentially injure an unprotected face. Both the cage and visor offer facial protection, although to differing degrees.

Youth and college hockey leagues require their players to wear a cage or a full-visor. Most professional leagues, including the NHL, now require players to wear visors. But this was only a somewhat recent development. Players now only go without facial protection in some recreational men’s leagues and in very casual games.

A visor (or “face-shield”) is a protective, transparent polycarbonate shield that attaches to the helmet. It can come in a half- or full-visor.

The half-visor only covers down to about the bottom of the nose, usually. The full-visor has an additional piece that protects the lower half of the face and includes a chin guard. The half-visor is attached to the front of the helmet, usually either on both, it’s top and sides or only on the sides.

The full-visor is attached to the top and secured through a chin guard with straps for the sides (similar to the cage).

What Are Pros of the Hockey Visor?

Players may choose to wear a visor for several reasons. These include its performance benefits and the visor’s adaptability, convenience, and style.

Hockey visors come in multiple styles and sizes, so they’re adaptable. For starters, players can choose to wear a half- or full-visor. Half-visors also come in varying sizes. Most come down to the bottom of the nose. But if a player prefers a longer or shorter visor, there are half-visors that come down to around the mouth or visors that are an inch or so shorter. Certain types of visors also allow for adjustment during a game.

Some visors are bolted to the top and sides of the helmet, which doesn’t allow for any adjustment. But other visors only attach to the sides of the helmet, which lets players adjust the height and placement of the shield at any time. Alternatively, players may choose to wear full-visor. Its upper portion is identical to the half-visor, but it has additional protection for the lower portion of the face and the jaw. The full-visor provides complete facial protection, unlike the half-visor.

In terms of performance, players may choose to wear a visor because it doesn’t disrupt their view of the ice. The polycarbonate visor material is transparent, so it’s almost as if you’re not wearing anything at all in front of your eyes. Players may also choose to switch from a cage to a visor once they reach adulthood. It’s likely that they grew up wearing a cage as a child, so the move to a visor is seen as a convenient upgrade. The half-visor is convenient because it allows for easy access to the face.

4. Wiping Your Face or Drinking is Quick and Easy

Players need to wipe off sweat and drink water throughout the game. The half-visor allows them to complete these tasks without removing the helmet – or unstrapping and opening the helmet’s cage or full-visor. The half-visor is also the most aesthetically pleasing option for facial protection. It gives off a casual appearance that still allows players to show personality, rather than fully covering their faces.

NHLers all wear visors as well, so the visor is associated with the look of professional players. Visors can also be tinted, which some players appreciate for their flashy style. But be careful: if you wear a tinted visor, you may attract unwanted attention and “chirps” from opponents.

What Are the Cons of a Visor?

The main problem with visors is their lack of guaranteed safety. Full-visors aren’t an issue in this regard, but half-visors are by far the most dangerous option for facial protection aside from wearing none at all. When players wear a half-visor, it leaves the bottom half of their faces unprotected. Not only that, but a stick or puck can come up under the visor and hit the upper portion of the face.

When you wear a half-visor, you essentially play hockey with the hope that you don’t get hit in the face. The visor will save you from contact with the upper part of the face at a straight-on or high angle. So it is better than not wearing any protection at all. But with a half-visor, the bottom half of your face is entirely left to chance occurrence. Most often, players will get through a game with no one getting hit in the face. But high-sticks and eye-level pucks can be dangerous hazards that do occur every now and then – even in the most casual and friendly of hockey games. Wear a full-visor to guarantee the protection of your face. But again, the full-visor doesn’t allow for easy access to the face during the game, because it’s strapped over the chin and jaw.

See also  How Much Do Hockey Sticks Cost? Cheap VS Expensive

3. Visors Can Get Foggy

Another con of the visor is that it can fog up while you’re playing. Players who sweat and overheat during exercise will cause condensation to form on the inside of the visor material. This condensation produces fog and sometimes moisture on the visor. The fog can be wiped away, and the breeze generated during skating on the ice will eliminate the fog. Anti-fog treatments do also exist. But fog can still be an inconvenience for some players.

When players switch from a cage to a visor, they may also find the visor’s bottom barrier to be distracting when they look down at the puck. The bottom of the visor adds a mild “line” to the vision, but it just takes some time to get used to it.

What Are Pros of a Hockey Cage?

The most immediate pro of wearing a cage is the protection it provides. Playing hockey with a cage ensures complete confidence in the protection of your face. The cage fully covers the chin, jawbones, and everything above them.

The “holes” formed in the steel cage are also made small enough to prevent a puck or a stick blade from going through them. The cage is very strong as well, so if you are to get hit in the face, the cage will protect you.

The cage’s holes are, however, big enough for you to squirt water through them during the game. So if you have a spray bottle, you can drink from it through the helmet’s cage.

The cage may also not be as visually distracting as you might think. Today’s hockey cages are nearly all made in a grey/silver colour, which minimizes their appearance in front of the eyes. But even when cages were black – and, decades ago, they were very wiry and thick – players would still get used to the visual as part of how they see the hockey game.

5. Not Risk of Fogging

Cages will never fog up either, as visors sometimes do.

What Are Cons of a Cage?

However, some players dislike the cage because of its visual barrier in front of the eyes. Most often, though, it just takes some getting used to for players who have never worn one before.

See also  Can You Hit The Goalie? Checking & Poking Rules

1. Must be unstrapped. Annoying to lift up when on a break or trying to have a drink.

The cage also must be unstrapped and opened off the helmet if you want to have access to your face during the game. This can be inconvenient for players who sweat a lot during exercise, or if you don’t have a squirt bottle.

2. Distracting at first. Generally uncomfortable for some.

The cage is also a practical design that lacks the style of a visor. It comes in either grey or black (though black is more distracting to look through than a grey cage). And while color is an option for a cage, it’s not really a piece of equipment that’s designed for its looks.

Hockey Visor vs. Cage: Which Is Better?

The moment has arrived: Is the cage or visor better? The answer, at least in part, boils down to what you prioritize when you’re on the ice.

Style points aside, either the cage or full-visor is the best option. Both of these provide complete protection for the face, which is very important. Without facial protection, hockey players have suffered serious injuries to their faces. Some players, such as NHLer Bryan Berard, have nearly lost an eyeball from entirely accidental plays. And players routinely lose teeth when not wearing protection.

If you’re concerned about your safety, wear a cage or full-visor.

More players actually wear the cage than the full-visor. Between these two options, you may factor in the visual elements of each choice. Both the cage and full-visor have some aspects that you’ll have to get used to. But if you’re going for full facial protection, the cage is somewhat less chunky and doesn’t risk fogging up on the ice.

If you can’t handle the cage’s visual presence, go with the full-visor.

But in terms of performance, convenience, and aesthetics, the half-visor is the best choice. It provides the lightest and least intrusive visual protection for the face.

But remember: The half visors benefits are countered by the safety risks that come with it. If you choose the half-visor, you’re always risking an injury to your face – and possibly even to the upper portion of your face that you think you’re protecting with the visor. If you take seriously your safety, you need to use the cage or full-visor. If other concerns such as performance and style outweigh safety, go with the half-visor. Many players use a half-visor and come away from their games without injuries. But a painful trip to the dentist’s chair – or worse – isn’t always worth the minor performance benefits and superficial pros of a half-visor.

The cage and full-visor are designed for a practical and safe hockey game. They aren’t as sleek or convenient as the half-visor, but they will save your face from serious injuries. Half-visors offer protection as well, but they always carry a risk. Hockey players use all three options, and any player can likely get used to any of the three. Just weigh your priorities on safety and style before making the choice for yourself.