How Many Calories Does a Hockey Player Burn? (More Than You Think) 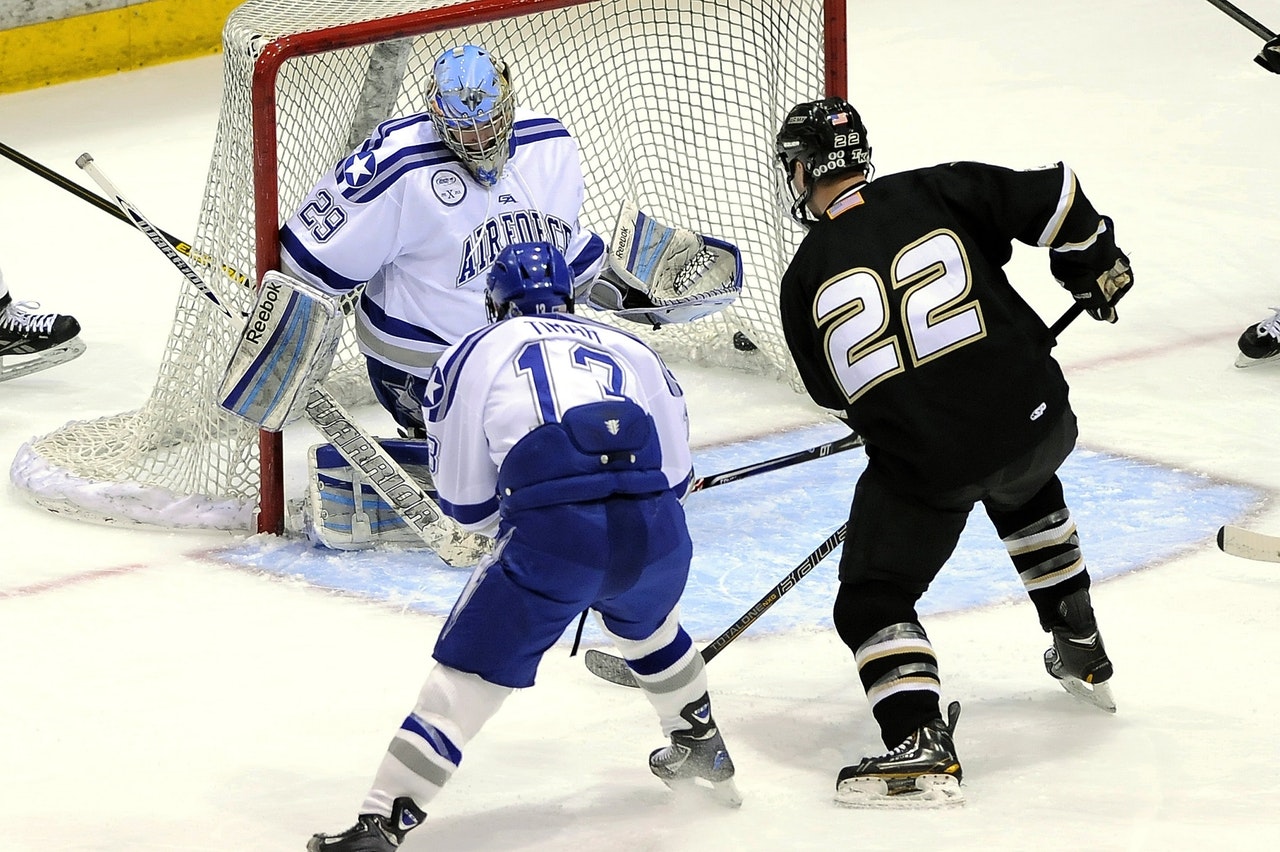 With ice hockey being as fast-paced and intense as it is, you may find yourself wondering how many calories the players are burning over the course of a 60-minute game. Though players tend to only be on the ice for relatively short shifts — around 45 seconds at a time, they’re playing at a high intensity and getting their heart rate up.

NHL players burn anywhere from 1,800 to 2,500 calories per game. This number is less for players participating in recreational games, however, it can still get up to around 1,000 calories per hour of playing ice hockey. Due to the high-intensity intervals of the sport, players will continue to burn calories even once they’re off the ice as well.

Factors For How Many Calories a Hockey Player Burns

Hockey is a serious calorie burning activity. Calorie burn during any exercise will of course be dependent on your age, sex, height and weight. Other factors can include how much ice time you get and the competive level of your hockey game.

These numbers aren’t intended to be a hard and fast rule but just an estimate based on the average individual.

It should go without saying that the longer somebody plays hockey, the more calories they’ll burn by the end of the night. A forward who’s only playing 12 minutes per game will likely end up burning less than their teammate who’s playing for upwards of 20 minutes in total.

While hockey shifts tend to be under 60 seconds, a player should be physically tired after they come off of the ice. If you’re not breathing hard and in need of a break, you’re likely not playing as intensely as you could be.

NHL players are going full-out for every shift, meaning they tend to burn the maximum amount of calories by the end of the night.

While recreational hockey can be a great activity and an effective method of exercise, it just won’t be up to the same standard as NHL games. In the NHL, the competition is fiercer and the level of effort required from players is significantly higher.

The simple truth is that younger players on average have higher levels of energy and stamina and can play at a harder pace for longer periods of time. They’re likely to burn more calories per shift than their older counterparts.

A player who has a heavier body weight is likely to burn through more calories than their lighter teammates. A person weighing in at 125 pounds may burn less than 500 calories after playing for an hour while a male weighing in around 200 pounds can expect to burn over 700 calories per hour of play.

Hockey is a High-Intensity Workout

There is no special method to maximizing calorie burn during a hockey game.

Simply put, skating and working your hardest on the ice will burn calories. Every stride or stop and start while you’re on the ice requires you to exert your body.

Shooting pucks can also be a light workout for your arms – with slapshots being the most intense. The bodily movement necessary to skate around and shoot, or shoot from a standstill, requires effort.

Hockey is also sometimes compared to a sprinter’s workout. Because players play in shifts, they exercise in intervals before returning to the bench for a quick rest.

The players on the ice then take their shift and soon return to the bench to repeat the process – over and over for the length of the game.

How Many Calories are NHL Players Burning Per Game?

Jesse Demers, who was the strength and conditioning coach for the New York Islanders, measured the calorie expenditures of players and came to the conclusion that on average, players are burning through 1,800 to 2,500 calories per game.

This can depend on the position of the player and how many minutes they get on the ice during the game. A forward who’s chasing the puck up and down the ice will likely burn more calories by the end of the game than the goalie who largely stays in one space.

To put this number into perspective, a mile of running for the average person tends to burn around 100 calories. 1,800 calories would be 18 consecutive miles of running!

How Many Calories Do NHL Players Consume?

On average, NHL players are consuming between 5,000 and 6,000 calories a day. The average healthy male consumes around half of this number, which shows how much extra fuel these professional hockey players require to maintain their strength.

Even with this high caloric intake, NHL players are at risk of losing weight throughout the season due to the physical nature of the sport. However, there are dietitians and trainers on staff to help ensure the players are receiving adequate nutrition and the proper amount of calories each day.

Is Ice Hockey a Good Workout?

When compared to other team sports, hockey ranks the highest in the number of calories burned per hour. If you’re looking to lose weight, playing some recreational hockey can be a great form of exercise that many people enjoy participating in.

When compared to running or even swimming for hours, many people enjoy the team nature of hockey and find it to be faster-paced and more exciting. Even if you’ve never considered playing hockey before, it might be fun to check out your local groups and see if you can participate!

Hockey actually ranks as one of the top exercises for improving cardiovascular health. The high-intensity skating followed by a period of rest is known as interval training and has actually been proven to improve the strength of your cardiovascular system and a person’s endurance level — which ends up being greatly beneficial to your overall health.

Do Hockey Players Lose Weight During a Game?

Due to the significant amount of sweat that most hockey players lose during the course of a game, they may end up losing anywhere from 5 to 8 pounds by the end of the night. This weight is mostly water, however, so it’s important that players keep hydrated before, during, and after the game.

Players can drink water at the bench once their shift is over and goalies keep their bottles at their net — as they can’t make it over to the bench as frequently as the forwards and the defensemen.

Over the course of the entire season, it isn’t unusual to see a player lose up to 7 pounds of body fat. This is due to the constant intense exertion that many players face during the grueling NHL season and the inability at times to rest and recover fully between games.

Overall, hockey is a great form of exercise and is sure to help keep participants in relatively good shape and improve their overall heart health due to the aerobic and anaerobic nature of the game. Hockey players can burn well over 1,000 calories after a game of pick-up hockey at their local rink.

NHL players have to be careful to ensure that they’re always consuming more calories than they’re losing, as it’s important that they keep their strength up throughout the long and busy season.

Luckily, there are designated personnel on staff to help them do so and to ensure that they keep their body in top playing form.

Ice hockey is a physically demanding sport. Goals, passes, and big saves may look natural for players, but skating and competing on the ice is a legitimate workout. Many players even pursue the sport for exercise.

Calorie burn during any exercise will of course be dependent on your age, sex, height and weight. Other factors can include how much ice time you get and the competive level of your hockey game.

See also  Who Scored the Most Goals in a Single NHL Hockey Game?