How Many Players Are On the Ice in a Hockey Game? (It’s Complicated) 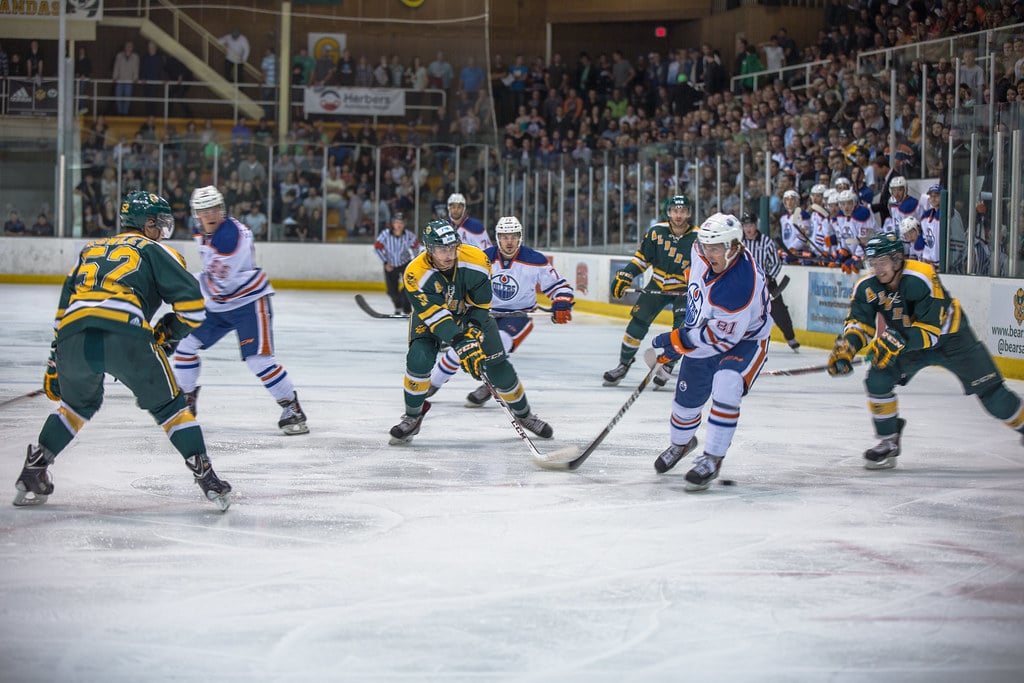 Photo by IQRemix at licensed under CC BY-SA 2.0 We may collect a share of sales or other compensation from the links on this page.

You may have noticed that there are sometimes different numbers of players on the ice at a hockey game at different times. This happens for several reasons — usually due to penalties where one or two players must go sit in the penalty box for a designated period of time.

As a rule of thumb, there are six players from a team on the ice at any given time. This number includes the goaltender. When it comes to serving penalties, this will have an effect on the number of skaters, causing them to drop down to four or three and be shorthanded for 2 to 5 minutes. During overtime in the regular season, each team will skate with three players.

But that’s not all. Read on to find out why…

How Many Players Dress For the Game?

A team is allowed to dress up to 20 players for each game. This number tends to be broken down as follows:

From these numbers, one goalie will be in net and the five skaters will be broken down into 2 defensemen and 3 forwards. The forwards will include a left-wing, a center, and a right-wing.

A team can decide to break from tradition and dress 11 forwards and 7 defensemen or they can go with 13 forwards and 5 defensemen — though this latter option is rare. Two goaltenders are always required, per NHL rules.

In the case of an injury or if the original goalie just isn’t having a great night, the other goaltender from the team can tap in and continue the game. The other skaters will switch on and off throughout the game due to shift changes.

Full-strength hockey is considered 5-on-5, which counts the skaters but not the goalies. During certain strategical times during a game, the goaltender may be pulled and the team can choose to put another skater on the ice for the extra man advantage.

When this happens, the lineup would be 6-5 skaters, though the team with the extra player edge takes on the risk of having an empty net that the other team can break away and score a free and clear goal. This move often occurs if a team is trailing late in the game and they feel as if it’s their best option for creating a last-minute scoring opportunity to push the game towards overtime.

There are some rules and stipulations that NHL teams must adhere to when it comes to who they choose to take the ice in the next game. The 20 men who dress for the game must come from the 23-man active roster the team has.

These two rosters, the active roster, and the game roster can change daily and it’s up to the team to decide on how they move players around so they can create a strong game day lineup for themselves.

Decisions concerning the rosters must be cleared by the NHL Central Registry before they can be considered official. At this point, the player would then be eligible to play in the game in accordance with the guidelines set forth for all teams.

How Penalties Affect the Number of Players

If you’ve ever watched a hockey game, you may have noticed that all of the sudden, one team is only skating with 4 players instead of the traditional 5. This is due to a player getting placed into the penalty box, thus causing the team to skate shorthanded for the duration of the penalty.

In the case of two penalties, the team may even go down to 3 skaters — which can lead to a 5-on-3 situation and it’s a great time for the other team to gain scoring opportunities. Teams must have at least three skaters on the ice and if another penalty is accrued while two players are already in the box — it will be served after one player finished their time.

Penalties can range from 2 to 5 minutes, depending on if they’re considered minor or major. Minor penalties may include tripping, hooking, and slashing while major penalties are commonly reserved for fighting.

The team who is serving the penalty is on the penalty kill — meaning they’re trying to defend their goal and fight off the opponent while they’re down a player which creates a disadvantage for them. The other team is on the power play, meaning they’re in power as they have a larger number of players on the ice.

What About Playoff Overtime?

When it comes to overtime during the Stanley Cup playoffs, there is no 3-on-3 hockey. Instead, the overtime period stays at full strength. However, it does become a sudden death situation where the next team to score a goal gets the win.

In such an important game, teams don’t want to play weaker hockey with fewer guys. When you remove two guys from each team on the ice, the dynamic changes, and the style of hockey changes along with it.

There is less of a chance of a player getting checked to create a scoring opportunity when there is more open ice, so by keeping the lines at the same strength — teams are able to use their strengths to create chances for themselves.

What Happens If Too Many Players Are On the Ice?

Anyone who watches or plays hockey regularly knows that shift changes are fundamental to the game. Players with on and off while play is still going on, which can sometimes make for a confusing situation and can sometimes lead to miscommunication.

In the event that a team is caught with 6 players on the ice, they will receive a 2-minute penalty for having too many men on the ice. In this case, the coach can choose any player from the team to serve the penalty.

When a shift change is taking place, a player must be within five feet of the bench before another one takes his place. If the other player leaves the bench prematurely, this can be called for too many men on the ice penalty as well. It’s all about timing and players need to stay mindful and aware as they’re taking the ice.

Roster Limits Are Nothing New

There are various rosters that an NHL team must balance on a day-to-day basis and it can be a complicated process at times. However, by keeping a tight roster and ensuring that all players stay eligible to play, hockey as a whole benefit for both fans and players alike.

A hockey team can dress up to 20 players — with 5 skaters and a goaltender being on the ice during full strength. There are various penalty situations that can cause the number of players who are actively skating to drop to 4 or 3 and you’re likely to see this happen a few times at your next game.

See also  Does The Stanley Cup Get Bigger? Will It Run Out of Space?