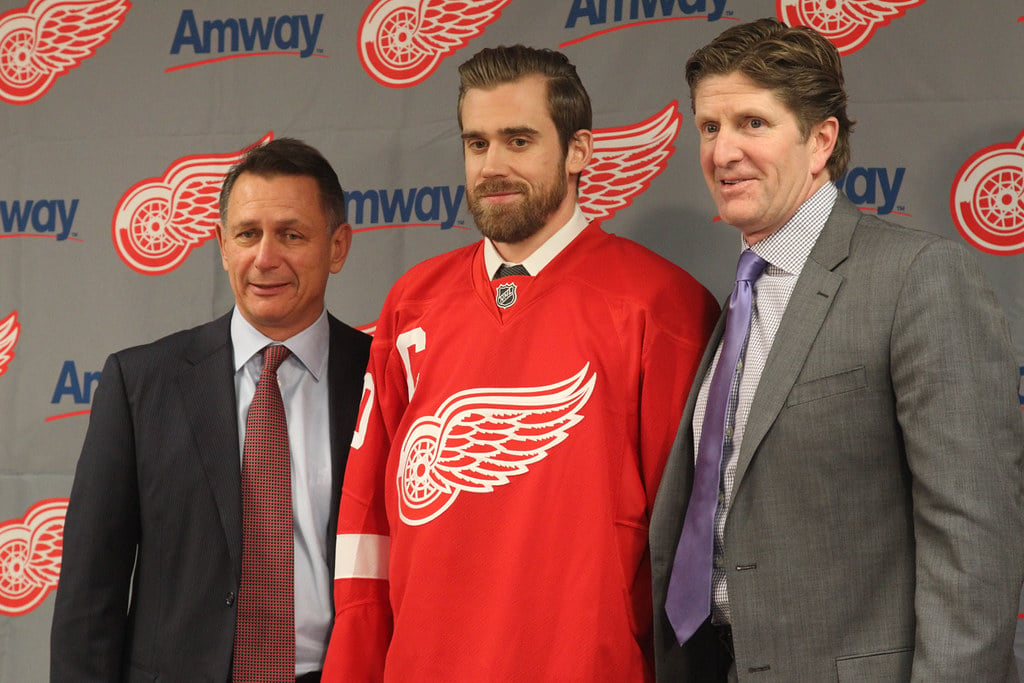 Ken Holland, Henrik Zetterberg and coach Mike Babcock. Photo by Tom Gromak licensed under CC BY-SA 2.0 We may collect a share of sales or other compensation from the links on this page.

It’s a common topic of conversation for hockey fans to discuss how much the top players in the league are bringing in per year — but have you ever been curious as to how much the coaches are making? Unlike the players, the coaching staff does not need to have their salary officially available to the public.

NHL head coaches can make anywhere between one and six million dollars — averaging between $2.5 million to $3 million. This is a significant sum that goes along with a position that comes with a lot of stress and scrutiny, especially when the team isn’t doing well. Assistant coaches can make upwards of six figures and are well-positioned to become the next head coach after gaining the necessary experience.

Who Are the Highest-Paid Head Coaches in the NHL?

Some of the highest-paid head coaches in the NHL include:

The Toronto Maple Leafs signed an unprecedented deal with then-head coach Mike Babcock in 2015 — an 8 year 50 million dollar contract. This was and still is the largest contract awarded to an NHL head coach. In fact, it’s basically in NFL head coach territory.

See also  What is a Hockey Enforcer & Do They Still Exist?

Partway through year five of the contract, the Leafs fired him as head coach. However, thanks to his guaranteed contract he’ll still be collecting his salary through the end of his agreed term.

How Much Do Assistant Coaches Make?

While assistant coaches are often bringing in significantly less than their seven-figure head coaches, they are gaining valuable experience and knowledge of the inner workings of hockey coaching at a high level.

When a team is on a losing streak, the coach is often the first person to take the blame for it. With the ability of the tides to turn on them quickly and fiercely, coaches want to understandably protect themselves.

If a coach is fired from one team and another team seeks them out to possibly hire them, they will have to go through the previous team as the coach is still technically under contract with them. This may lead to a sharing of costs between said teams for the remainder of the coach’s contract.

It wasn’t until 1989 that player salaries were made public information. Players decided to make their earnings known in order to help push the salaries higher as a whole and so that they’d be able to more effectively bargain.

Coaches don’t have a union of their own, so they aren’t under the same rules and regulations as the players. This means that they don’t need to publish their salary or contract negotiations to the public. However, through some investigative reporting and determined local reporters — there is often a good idea as to what a head coach signed for.

How Long Do Head Coaches Last in the NHL?

NHL coaches have one of the highest turnover rates when compared to other professional sports. The average length of an NHL head coach’s tenure is just under two and a half years. It isn’t uncommon for a coach to be fired partially through a season in order for the team to go in a different direction under a new head coach.

When taking a look at the current active coaching roster in the NHL, over half of the coaches have been hired within the last couple of years. This is a position with very little job security — which makes the guaranteed contract even more important for prospective coaches looking to join on with an NHL team.

While coaching at the National Hockey League level can be profoundly fulfilling when your team goes all the way and wins the coveted Stanley Cup — it can also lead to a great deal of stress and uncertainty when it goes the other way.

NHL head coaches are rarely able to stay comfortable for long in their position and that’s why a guaranteed contract agreement is usually a priority for them. When a coach is bringing in several million, they’ll likely want to hold onto that for as long as possible. If the tides shift and their team is on a losing streak, they’ll be grateful they can still collect their salary once they’re inevitably fired.