How Many Games Do NHL Referees Officiate Per Year? 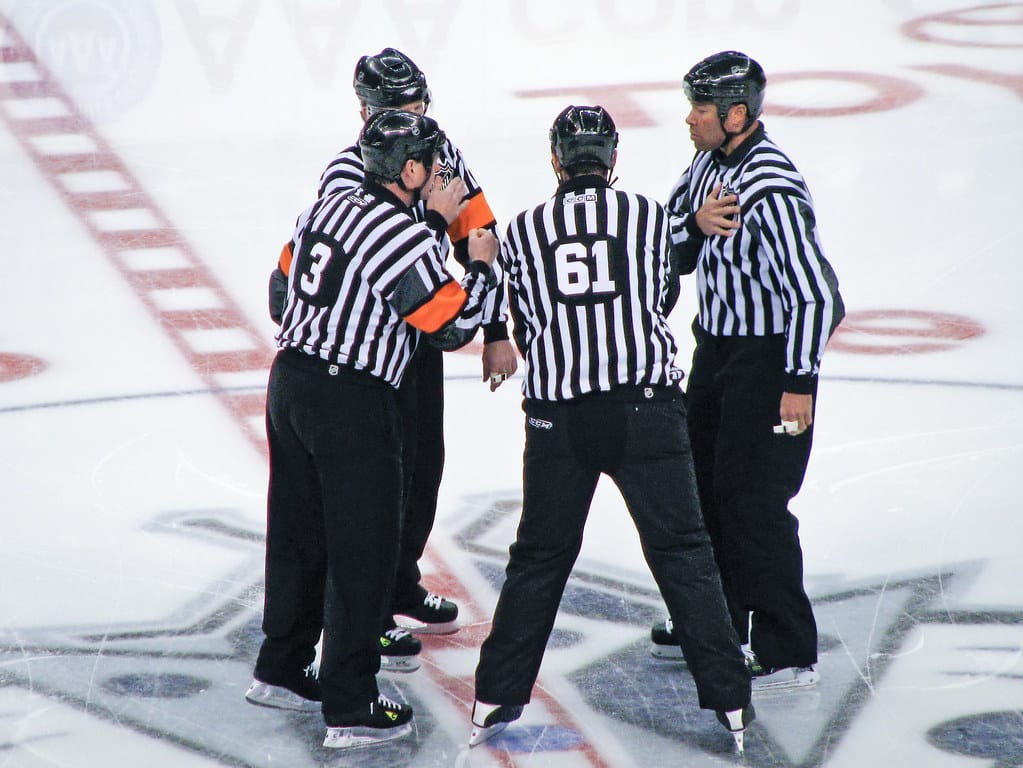 Photo by Mark Mauno licensed under CC BY 2.0 We may collect a share of sales or other compensation from the links on this page.

While the referees and linesmen of an NHL game may not always be fan favorites, you may find yourself wondering if the same individuals work every single game and if they do this job full time. The salaries for the referees are actually quite impressive and may come as a shock to you.

According to the agreement between the NHL and the NHLOA (National Hockey League Officials’ Association), a referee works 73 games in the regular season and if they work additional games, they will get an additional percentage of their salary per game. The officials have a full travel schedule as they referee NHL games during the season, but the money and the passion for the game make it worth it for many.

What is the Difference Between a Referee and a Linesman?

While you’re probably aware that there are four officials wearing the infamous “zebra stripes” out on the ice, you may not know that they are serving different purposes and have separate jobs. If you’ve noticed two of the officials wearing orange armbands — that signifies that they’re the referees for the game.

Other than the armbands, the uniform between the refs and the linesmen in the same — striped shirt, black helmet, and black pants.

In general, the referees are in charge of enforcing the overall rules of the game and they’re the ones who call the penalties when they occur (tripping, hooking, fighting, etc.). The linesmen, on the other hand, handle the line violations — such as offsides and icing calls.

See also  What Age Can Your Child Start Playing Hockey?

Currently, the NHLOA consists of 35 full-time referees, along with 35 full-time linesmen. These are an elite group of officials who have proven themselves over years of officiating before they’re finally offered a contract with the NHL.

Along with the NHL officials, the NHLOA has 10 minor league referees and 6 minor league linesmen on staff who switch between the AHL and the NHL when needed.

Due to there needing to be 2 referees and 2 linesmen at every NHL game, officials will travel to where they’re needed to ensure that the game is properly officiated. This can lead to a significant amount of time away from their home and families.

How Many Regular Season Games Do the Officials Work?

NHL referees, per the agreement between the NHL and NHLOA, work 73 games during the regular season. The linesmen work 75 games. There are 82 games during a full season of the NHL — meaning the officials work just under this number.

Similarly to their salaries, the number of games that they must work has been collectively bargained by their association and the NHL. The officials also receive a pension and retirement fund — along with insurance and other perks.

Being an NHL referee can be a relatively thankless job, but they’re necessary to keep the game fair and civilized — and of course to break up any on-ice fights that may break out between players. Believe it or not, they’re not there to make controversial calls, as those can affect their career.

How Much Do the Officials Make Per Season?

It may come as a surprise to some to find out that the referees and linesmen make over six figures during a regular NHL season. This large sum partly makes up for all of the jeering and taunting that they endure throughout the year.

The starting salary for NHL linesmen is $110,000 and tops out at around $250,000. Similar to their referee counterparts, they receive a bonus for any playoff games worked as well.

Currently, it is reported that two NHL referees are making the maximum salary. While it’s not quite a player salary (which starts at $750,000) it’s a highly respectable one and the next time you hear the crowd booing the ref for a call, you can rest assured that they’ll take those taunts with them all the way to the bank.

How to Become an NHL Official

If you’re impressed by the salary and are interested in how one would even become a member of the NHLOA — you’ll want to check out the requirements before you get your hopes up. There is a very small number of positions when compared to the total number of players in the NHL, with only 95 individuals currently on contract.

Unlike being an NHL player, the officials can work for a much longer period of time and until an older age as long as they stay in shape. The job isn’t as physically brutal as it is being a player, as they’re not consistently hit and knocked around.

To possibly become an NHL referee or linesman, a person needs at least a high school diploma and five years of officiating experience (junior or minor league). There are other smaller requirements, such as living within an hour of an NHL city and being willing to travel.

The Glamorous Life of an NHL Official

The next time you’re watching your favorite NHL team and you’re getting frustrated that the referee is missing calls — you’ll remember that they’re not there to make your team lose or give the opponent an unfair advantage. It’s quite the opposite really.

While it can’t be fun to be booed down by the home crowd, the officials are there to do a job and then get back home to their families. Oftentimes, they have experience playing and maybe even play in the NHL themselves — such as current referee Jake Brenk.

They follow a hectic schedule during the regular season where they spend a lot of time away from home and away from their loved ones. Everyone is united by a love and passion for the game and they want to see it played fairly and safely — so everyone can get back home at the end of the night and do it all again the next day.