Why Are Ice Hockey Goals So Small? 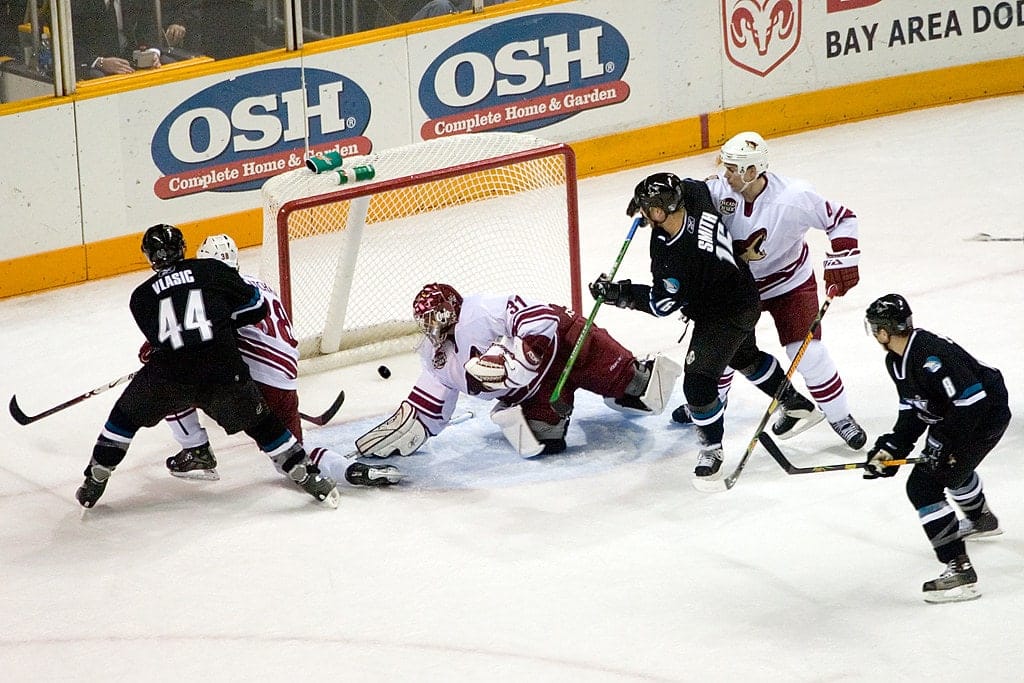 Photo by Elliot licensed under CC BY 2.0 We may collect a share of sales or other compensation from the links on this page.

Have you ever noticed how tiny the hockey net looks next to a ginormous goalie dressed in their full game time pads? Oftentimes, there is very little empty-net space left open when a 6’3 goalie is crouched in front of it. This wasn’t always the case, however.

With the average size of NHL goalies increasing over the years but nets staying the same dimension, there is less and less open space for a puck to find its way into the back of the net. There is an increasingly loud demand for the nets to be bigger. It’s only fair, right? However, the issue hasn’t been seriously considered by the people who make these decisions.

From 1985 onward, the NHL goal net has been 6 feet wide by 4 feet tall. Oftentimes, goaltenders are looming over the net when they’re standing up fully. When in a butterfly position, they can nearly cover the entire front of the net and block incoming shots.

With goalies increasing in size but the net staying the same, it creates somewhat of an unfair advantage for today’s goalies when compared to goaltenders 30 years ago. Smaller goalies having to defend the same net was a more difficult task, especially when you consider that they didn’t have the same type of pads that they have now.

Combining taller goalies with larger pads means that goals have been increasingly harder to come by on average. This means less fun for fans in general and more of a challenge for the other players on the team who often have to seek out the tiniest gap between the goalie and the net.

How Large Is the Average NHL Goaltender?

These days, the average height of an NHL goalie is above 6’2. There have been outliers of course, such as Ben Bishop who came in at an astounding 6’7, making him the tallest goalie in NHL history. It wasn’t so long ago in NHL history that goalies were below the 6-foot mark on average.

This position has been the most improved over the past several decades — size-wise and skill level-wise. While the average height of a goalie may even increase an inch or two over the next decade, there is an increased chance of seeing games with only a goal or two.

On average, fewer goals are being scored in the NHL than ever before. In fact, it’s at the lowest point that it’s been at as of recently. With goal scorers having to snipe the puck into the top corner while the goalie is on their knees, there is a limited opportunity for a goal to be made.

The butterfly style saves have revolutionized the goalie game, along with increased pad protection. There are very few “five-hole” goals anymore, as goalies can effectively close off this area with their larger pads.

With fans paying so much for tickets these days, it would behoove the NHL to increase the excitement of the games. Nobody wants to pay hundreds of dollars to watch one goal be scored — this kills the fun of watching the game and of playing it.

If the NHL doesn’t want this trend to continue, they’ll be forced to make a change at some point. The most obvious choice is to make the nets larger as there’s no reasonable way to decrease the size of the goalie’s gear without sacrificing their safety, which of course nobody wants to do. This would even out the playing field between goalies of the past and goalies of today.

Making the Case for Larger Nets in the NHL

The main argument that can be made for nets being larger is that goalies are simply bigger than they’ve ever been before. They’re taller, they weigh more, and inevitably they take up more space in front of the goal.

Even a passing hockey fan can look at the NHL game playing on TV and say, “Hey, that goal just looks comically small next to that massive goalie.” On average, there are fewer goals scored these days than in years past, and creating a bit of extra space in the net could lead to more entertaining games with an increased opportunity for fans to cheer on their team for scoring.

The Problem With a Bigger Net

You may be thinking that a larger net would be unfair for younger players who would be further size disadvantaged when playing with a bigger net and you’d be correct. To resolve this issue, younger and even high school players could continue to use the current dimensions while college and junior players could make the call on whether or not to implement a larger size.

However, this could lead to a skilled, high school goalie struggling to get used to the increased area that they need to defend and a case could be made against the shift.

In actuality, the size increase would likely be around an inch or two — so nothing crazy. However, this could be the difference between a shot going off the bars to a shot going to the back of the net.

It could also be argued that to change the size of the net would be to change the game itself. This is debatable considering that the vast majority of players would quickly adapt to the change and while it would be a challenge at first, the game as a whole would improve in terms of the rise in the number of goals scored during games.

For the time being, hockey nets will be kept the same as they have been for years. There is no serious consideration currently on the topic — but perhaps it’s something the NHL will debate during the upcoming off-season.

It’s not unheard of for a major sports league to shift rules and regulations around to better fit modern times. Baseball did it when they lowered the mound and nothing disastrous happened other than hitters began hitting more, which in turn made the game more exciting for onlooking fans.