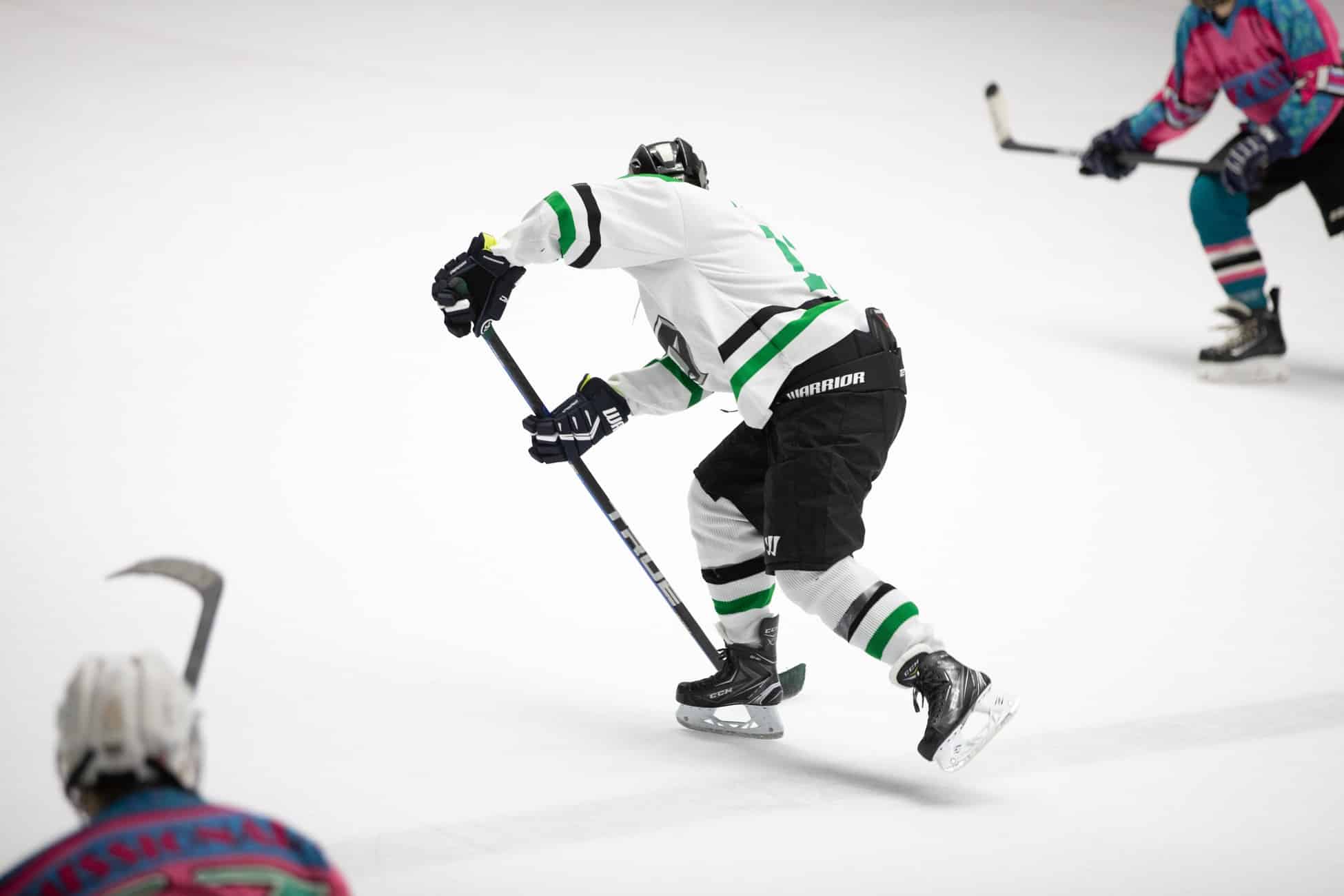 When you watch a hockey game, you’ll notice that the players wear a full body of equipment. This includes what looks like a pair of shorts that are worn on the player’s lower half. Why do hockey players wear shorts? Why don’t they wear full pants? Why are the shorts still sometimes called pants? We’ll provide everything you need to know about hockey pants in this article.

Hockey players wear shorts, which are usually simply called “pants,” for mobility and safety reasons. The pants are padded and serve as protection for the thighs and the waist region. The pants are short to allow for the maximum range of motion during skating. They fit tight around the waste, but loose around the thighs, and come just above the knee cap of the shin pad.

What Are Hockey Pants?

Hockey pants – or shorts, as they’re called in Europe – are part of the full body of equipment worn by ice hockey players at all levels.

They are simply called “pants” in North America, rather than saying “short pants.” In some places in the United States, hockey pants are also called “breezers.”

Hockey pants cover a player’s thighs and their waist region.

The pants are made of a nylon fabric exterior that contains firm padding on the insides.

Heavy pads are included on the front thigh portions of the pantlegs. The waistband section also contains padding.

See also  How Many Calories Does a Hockey Player Burn? (More Than You Think)

The backs of the pantlegs aren’t padded. For this reason, you shouldn’t turn your back to a player who is trying to shoot the puck past you toward the net.

The front padding on the pants will protect you from a shot that hits your upper leg. Shin pads work in a similar way and will take the brunt of a puck that hits the front of your lower leg.

Hockey pants are worn over the athletic supporter (or jockstrap). They also cover the top portion of the hockey socks that are pulled over the shin pads.

Some players attach their socks to Velcro on their athletic supporter, while others use a clip or sock tape to hold them up. Either method is covered underneath the hockey pants.

Hockey pants were originally worn because shin and knee protectors were bulky. This would require oddly fitting and large long pants, which would also restrict mobility during skating.

How Should Hockey Pants Fit?

Hockey pants fit tight around the waist, but more loosely around the thighs. This way, the pants stay on securely at the waist while allowing for optimal mobility during skating.

Around the waist, hockey pants can fit loosely until you secure them with the strap belt or tie.

The lowest point of the pantlegs should come just to the top of the knee cap of your shin pad.

If hockey pants are too long, they will hang over the knee cap and hinder your skating stride – in addition to just looking odd.

If hockey pants are too short, they will reveal too much of your thigh. This would be dangerous, exposing your unprotected thigh to pucks, sticks, and possibly even skate blades.

Make sure your pants end at just the top of the knee cap of the shin pad when you’re standing up.

For hockey pants, you are better off to err on the side of just slightly too long rather than slightly too short.

Do Players Ever Wear Long Pants?

Long hockey pants do exist, but they offer a more restricted range of motion than short hockey pants. This is because long pants fit more tightly across the thighs and around the knees.

Some leagues may not require players to wear a full body of equipment. They may instead have players that wear long pants (similar to those that referees wear), but these leagues are uncommon.

Referee pants usually have a small amount of padding, but not to the extent that hockey pants do.

The NHL’s Philadelphia Flyers and Hartford Whalers did wear full pants for a period of time in the 1980s. These pants were called “Cooperalls,” manufactured by a company called Cooper.

Cooperalls were poorly received. Players complained that the pants were too warm and lacked friction.

Without friction, the players would slide more quickly when they fell on the ice, increasing the chance of injury.

The full pants are also limited to the extension allowed by the seam and width of the pair of pants. Often, this would allow less extension, or range of motion, than short pants.

Whether you call them shorts, pants, or breezers, hockey pants are worn for safety and performance reasons. They provide the best combination of protection for the thighs and waist, while still affording the best range of motion for skating. Long pants have been tested by the NHL, but they are usually reserved solely for referees and roller hockey players.