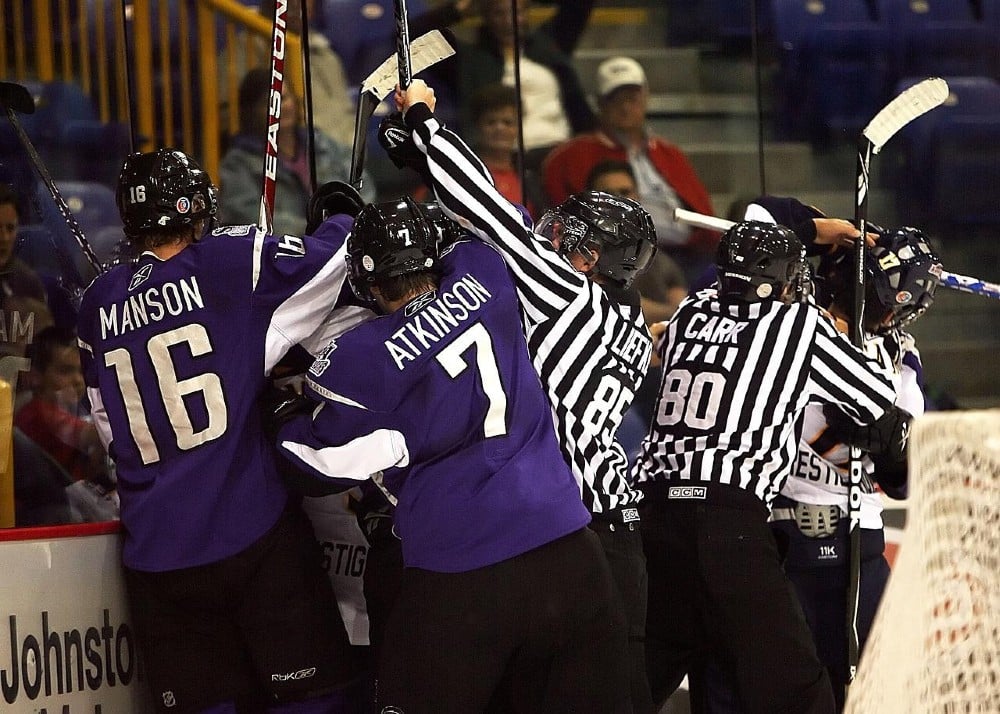 In ice hockey, many players and fans don’t pay attention to the fact that referees have numbers on their uniforms. Despite this slightly insignificant reality, it is essential that there is a system in place to monitor different referees and hold them to a high standard.

Hockey referees have numbers on their back for identification starting in 1955 as well as the black and white jersey. Numbering the referees and linesmen helps track the individual to the league rulebook and organizes employment opportunities whether that is in the NHL or any other league or location.

Why Do Ice Hockey Referees Have Numbers?

Identifying referees with numbers ensures that referees can be tracked for payment, performance, and many other aspects that merit recognition or firing from their position. Referee numbers help organize the hockey databases of different leagues and assist with categorizing referees based on experience.

An example of why referees have numbers is reflected in a sample list of current NHL on-ice officials:

By having numbers assigned to each referee it is much easier to locate and identify referees and keep track of their performance. In addition, the numbered referee system makes the process of assigning referees to games much easier. In short, numbering referees simplifies and quantifies a large group of individuals to better organize officiating crews for ice hockey games.

If there was no way to quantify referees, then it would be very difficult to identify which referee was a part of certain games or what their performance has yielded. For record keeping, just being able to write down a number makes it much easier to organize past data.

What Else do Referees Wear During an Ice Hockey Game?

In addition to the black and white striped uniform and their number, ice hockey referees wear a helmet, black pants, skates, and a whistle. A clear visor is also required to be worn to protect the face of the referees and hockey players are also required to wear a visor as well.

Depending on the league or state/province/country there could be a slight difference in what referees typically and are required to wear. In North America and Canada, the above description of the ice hockey referee is most accurate.

What are Some of the Responsibilities of an Ice Hockey Referee?

Communicating with off-ice officials, players, and coaches, being an ice hockey referee is difficult for several reasons.

To be an ice hockey referee you must be able to skate very well and avoid contact from the action between players to prevent an injury. Along with being a great skater and nimble on the feet, an ice hockey referee has to keep an eye on calling several different penalties that greatly affect the course of the game.

Being a referee requires a strong mental makeup to make the honest call and back up you’re reasoning for a penalty. Additionally, referees are responsible for separating fights which can involve physically breaking two aggressive players apart from each other which is difficult.

A typical referee crew includes four on-ice skaters and several other off-ice referees to keep an extra eye on game action and for instant replay review. On-ice referees have earpieces in to consult with other referees and outside officials in the NHL for example.

Additionally, referees and linesmen will huddle together to consult with each other if a penalty or whistle blow was correct or incorrect. Oftentimes players, coaches, and fans will scoff when this happens because they believe the refs are unfairly influencing the game which is typically untrue.

Huddling together is a method to overcome a difficult decision and make the right call rather than influence the game in an unfair manner. Another unfortunate reality referees face is that the crowd, players, and coaches are often arguing against them because they have to make high-pressure and adverse decisions that can influence the game in a big way.

What are the Orange Bands Referees Wear in Addition to Their Numbers?

In addition to wearing the white and black striped uniforms (often referred to as Zebras), hockey referees wear wide bright orange bands to identify themselves and to distinguish themselves from the other two linesmen. The linesman just wears the standard black and white uniform without the orange band.

There is no specific rhyme or reason to why orange was selected as the color that referees must wear on their sleeves but nonetheless, it is noticeable and contrasts well with players, coaches, and fans.

On the ice, there are two regular referees that wear orange bands and two linesmen that help officiate the game along with the other two referees. Both positions work together on the ice to blow the whistle for violations or assess penalties. Next, we will delve into the differences between the two essential on-ice referee positions.

What is the Difference Between an Ice Hockey Referee and a Linesman?

Referees are responsible for general observance and rule enforcement of the game as well as breaking up scuffles between players. Referees serve more administrative roles including determining proper goals, assessing penalties, and making announcements to players and the audience about controversial calls.

A linesman, also an on-ice referee, is mainly responsible for violations pertaining to red and blue lines on the ice. Linesman can also get involved in breaking up fights if the referees are outnumbered in a big scuffle.

Since fighting is legal in the NHL, both the linesman and referee (two each) will allow fighting until one player is either injured or falls onto the ground after scuffling. That is when the four referees (two referees, two linesmen) are responsible for breaking up the fight which requires courage and strength.

Linesmen are also responsible for administering face-offs. Icing and offside infractions are also made by the linesman as they manage more technical rule violations; the linesman’s main role is to support the rigorous job of being an ice hockey referee.

Refereeing ice hockey is a very difficult job as outlined throughout the article yet is very enjoyable for older hockey fanatics. As mentioned previously, referee numbers are important for organizing identification as well as tracking performance and many other functioning aspects.